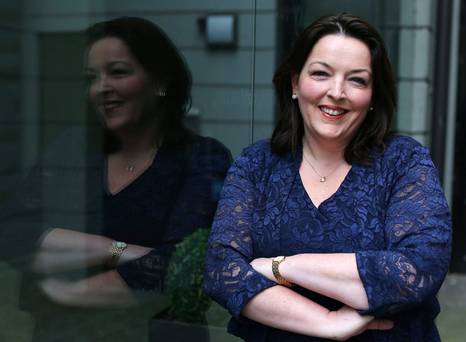 Tina is the CEO of Grafton Recruitment Ireland and is the Policy Chair of the Federation of Small Businesses in Northern Ireland. She is regularly asked to comment on television and radio on a range of business, political, cultural and societal issues.

1. How did you end up as an Honorary Consul for Finland?
I approached the Ambassador as a result of my fascination with the Finnish input into the Northern Ireland Peace Process.  Having done some further research I soon began to feel a real affinity with the Finnish way of life. Taking up the role in the same year that Finland celebrated 100 years of Independence felt very apt and I truly feel honoured to be able to promote the economic, political, academic and cultural ties we share. This year the UN identified Finland as the happiest place to live and I am keen to replicate that sense of positivity in Northern Ireland where we are emerging from the dark days of conflict and division. We have much to learn and be inspired by.

2. What do you enjoy most in your role as an Honorary Consul?
I enjoy discovering the many synergies between Finland and Northern Ireland. While there is a lot we can try to emulate from the Finnish approach to life, the amount of similarities between our two nations never ceases to amaze me. Given my passion for business I particularly enjoy mapping out the possible links that would help strengthen our respective economies and ways in which we could work even closer together. Providing consular support to the Finnish community in Northern Ireland has been a pleasure, helping them with business queries, passport and other issues. I’m also proud to represent a country leading the way in terms of gender equality. The make-up of the national government is a leading light to all of us who value equality and fairness in our democratic institutions.

3. What is Finland known for in your area?
Finland quietly but very effectively contributed to making Peace in Northern Ireland a reality. We are greatly indebted to the late Prime Minister Harri Holkeri and President Martti Ahtisaari for their efforts to secure the Good Friday Agreement just over twenty years ago. Perhaps the country’s own experience of bitter civil war helped them lend a unique and invaluable perspective for the other negotiators to borrow from. I believe that building a peaceful society is inextricably bound to growing a prosperous economy. Learning from our friends in Finland, Northern Ireland must work hard to become a centre of economic excellence and stability.

4. What do you wish people in your area knew more about Finland?
Finland has set a goal to make the country a global circular economy leader by 2025. For some years the country has been a leader when it comes to promoting clean energy and using the most innovative technology available. A considerable number of Finnish business sectors have adopted the circular approaches in their businesses. The country has a real opportunity to become a front runner in developing green solutions and we must learn from them. Finland will hold the Presidency of the European Council next year and has already said it will prioritise skills and education as a means of addressing digitalisation and automation which are challenging labour markets. I understand this issue well in the context of my recruitment businesses and the evident challenges that exist as a result of the changing nature of the way we work. Education is the cornerstone of any healthy economy and there is much Northern Ireland can learn about the Finnish approach to educating and empowering young people.

5. What does your area have to offer for Finns or Finnish companies?
Northern Irish businesses are increasingly seeing the merits of doing business in Finland and repeatedly tell me how trustworthy the Finnish are and how they never need to chase up an outstanding bill! This sense of honesty is a hallmark of the Finnish people and I hope will continue to motivate many more businesses in Northern Ireland to interact with the Finnish market. The Northern Irish approach to business operates on the same principle of honesty, delivery and openness. That’s why I believe we are economically compatible and speak the same language of integrity and decency! Northern Ireland has a range of outstanding local produce, textiles, machinery and equipment that is already well received in Finland. In my role as Honorary Counsel I am looking at creating opportunities for trade visits to Finland and return visits to Northern Ireland in order to strengthen existing links and look at opportunities for promoting even greater co-operation.

6. What is your favourite Finnish word or expression? Why?
‘
Sisu’ to posess ‘willpower, tenacity and persistence’. These are qualities that I have found essential to building my own business from just two employees in 2013 to now 350 in 2018! The people of Northern Ireland have cultivated those very qualities during a period of deep instability, war and uncertainty. Now that we have a peace process I am determined to use my privileged position as Honorary Consul for Finland to build a prosperity process. Creating the strongest links possible between our two nations will be vital to our collective success and continued growth.

Finland has about 400 honorary consulates around the world, 20 of which in the United Kingdom. Honorary Consuls promote economic, political, academic and cultural relations between Finland and the UK, and monitor the rights of Finnish citizens in their sphere of operation. They can for example guide and assist in contacts with the local authorities or the embassy. However, their possibilities to provide assistance are limited, nor for instance can they grant a passport.