Welcome to the new Team Finland newsletter! This newsletter covers some highlights of our past events. We publish the newsletter online, but if you'd like to be added to the direct emailing list, please contact us.

Parliamentary elections were held in Finland on 14th April 2019. The overall voter turnout was 72.1 %. Social Democratic Party received most of the votes (17.7 %) and seats (40), with The Finns Party (17.5 %, 39 seats) and National Coalition Party (17 %, 38 seats) right behind. The new Government, which was appointed on 6th June 2019, is led by Prime Minister Antti Rinne and includes 19 ministers: 7 from the SDP, 5 from the Centre Party, 3 from the Greens, 2 from the Left Alliance and 2 from the Swedish People’s Party. The full name list can be found here.

Prime Minister Antti Rinne presented the new Government Programme to Parliament on 11th July 2019. The aim of the new Government is a socially, economically and ecologically sustainable Finland by 2030. An ecologically sustainable Finland shows the way in mitigating climate change and protecting biodiversity. The Government is drawing a roadmap for an emissions-free Finland. The Programme pays attention to topics such as improving private and public research, development and innovation, carbon neutrality, ecological investments, cleantech, the bioeconomy and circular economy. Full Government Programme can be found here.

Finland’s Presidency of the Council of the European Union

The priorities of Finland’s Presidency are to strengthen common values and the rule of law, to make the EU more competitive and socially inclusive, to strengthen the EU’s position as a global leader in climate action and to protect the security of citizens comprehensively. During Finland’s Presidency, the Council will also be dealing with a number of other wide-ranging issues, such as migration and the multiannual financial framework.

Embassy of Finland in London launched the Presidency in the UK by organizing a garden party at the Finnish Ambassador’s residence in July. In compliance to the cross-cutting sustainability theme and the Embassy’s climate pledge, the Embassy of Finland is also committed to reduce its carbon footprint. We’ve set out some objectives for this, including encouring to walk, cycle and use of public transport in London, favouring vegetarian locally and eco-produced food, reducing paper waste, and avoiding using plastic.

A project that the Finnish Institute in London has been part of is a Finnish-British Tea Pavilion. With the tea pavilion project the Finnish Institute in London wants to support the principles of sustainable development and at the same time it creates international networks. The tea pavilion is result of co-operation between the architecture students of University of Westminster and Aalto University in Finland. The wooden tea pavilion is built in front of the Design Museum in Helsinki. The tea pavilion opened on 3rd July and is open until the end of the Helsinki Design Week on 15th September.

Pertti’s Choice popup was held at Protein Studios in London from 8th to 10th August. Pertti’s Choice is Finland’s first social enterprise owned by people with learning disabilities. It was founded by the members of the punk band Pertti Kurikka’s Name Day to support the careers of disabled artists. The Pertti’s Choice popup showcased Finnish and British Outsider art, alongside a vegan café with music performances and products available to buy. 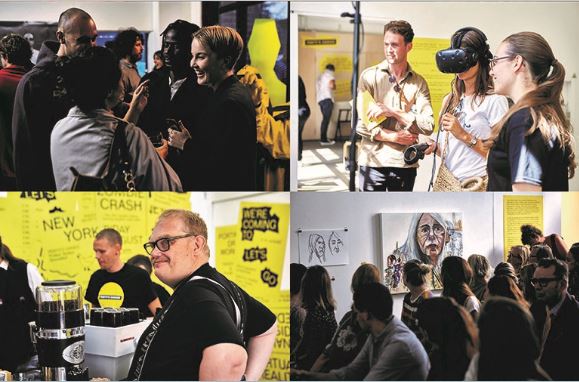 The Finnish-British Chamber of Commerce’s spring 2019

Some events calendar highlights included an Economic Update with Nordea, DIY OR NOT? Digital Marketing for SMS and Business leaders, Culinary Adventure through the Nordics, Patrons’ Dinner with a keynote speech by Henri Hyppönen, Body Language and Non-Verbal communication for Client meetings, Office Wellness: How Design Can Improve Well-being, FBCC annual Summer Reception and our very popular monthly Nordic Drinks. In addition, FBCC was part of supporting the Chelsea Flower Show 2019 Finnish Garden: The Roots in Finland Kyrö Garden.

One of FBCC’s spring 2019 events included their Investing and Fintech event in cooperation with members Danske Bank International and Womble Bond Dickinson. FBCC had a panel of experts, including investors and fintech entrepreneurs who discussed different elements of investing from raising capital to investor expectations and networking opportunities within the fintech field. You can read FBCC’s blog post about the event here.

Markku Keinänen started as the new Ambassador of Finland to the United Kingdom on 1st June 2019. Counsellor for Foreign Affairs Markku Keinänen was Under-Secretary of State for External Economic Relations before becoming the new Finnish Ambassador to UK. His career at the Finnish Ministry for Foreign Affairs (MFA) includes posts in Madrid, Brussels and London. In Madrid Keinänen served twice: first in 1989–1992 and then as the Head of Mission in 2009–2013. In London, Keinänen was the Deputy Head of Mission in 2007-2009. 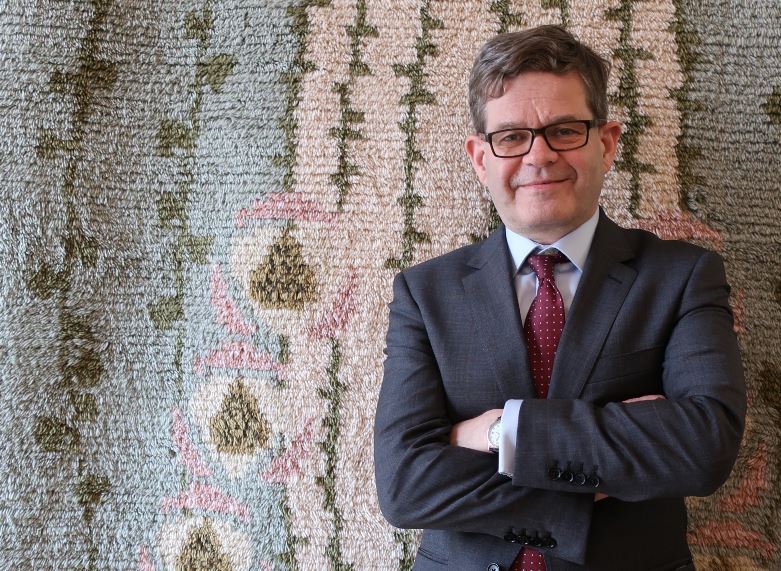 Team Finland has grown by three new members. René Söderman from Embassy of Finland in London and Sannamari Ojanperä and Roy Meredith from Business Finland.

René Söderman joined the Embassy of Finland as Press Counsellor in mid July. René oversees the communications activities of the Embassy, including media relations, country branding and cultural activities, aided by the Embassy Press Team. Prior to moving to London René was Senior Arctic Official representing Finland at the Arctic Council during the Finnish Chairmanship 2017-2019. He has previously been posted in México, Los Angeles and Oslo. At the Ministry for Foreign Affairs he has worked with various responsibilities in communications, multilateral development and European affairs.

Sannamari Ojanperä joined the Business Finland UK team as an Advisor in the beginning of May. Her role is to help Finnish companies expand into the UK and currently has a special focus on the consumer business sector. Before joining Business Finland, Sannamari worked in a global accountancy & advisory firm in London called Grant Thornton, where she specialised in SME clients. Her roles included working for the firm’s SME finance team, helping clients to raise funding for growth. In her latest position she worked as an Analyst in the firm’s SME consulting service, where she supported management teams to reach their growth ambitions.

Roy Meredith joined the Business Finland UK team as a Senior Advisor in May specifically working for Invest in Finland. His role is to promote commercial opportunities within Finland to UK based companies and to support them in expanding their business operations into the country, particularly within RD&I. Roy works across all Business Finland’s key sectors, and with the UK having such a strong ICT ecosystem, much of his work is focused around this. Prior to this role, Roy worked in Inward Investment for a region in the UK, seeking to attract foreign companies to invest there.  Before his inward investment roles, Roy worked in senior international positions for digital companies in computer games and film industries

The Finnish Embassies in the UK and Ireland, in collaboration with Business Finland, joined forces for this year’s Team Finland Day in form of a Brexit Roundtable that attracted approximately 20 companies interested in hearing about this topical issue.

The roundtable was chaired by Kristiina Kauppinen, Foreign Ministry Brexit desk, and both Ambassador Markku Keinänen and Ambassador Raili Lahnalampi shared insight from their respective countries. Also, the Finnish Office of the Data Protection Ombudsman and the Finnish Customs were invited to take part in the briefing - from data transfer and tariffs point of view. The discussion led by Kristiina Kauppinen, highlighted on the scenario of a no-deal result from the Brexit negotiations, i.e. if the Great Britain and EU will not agree on steps how Britain will leave the EU. The company Linkosuo also gave insight from a company’s point of view on how they are preparing.

UK Clinic and speed-dating tables were also held during the day. The company cases at the UK Clinic were Tridify, and Klinik. During speed-dating several companies approached the Team Finland team to hear about the UK and Ireland markets.

The Embassy of Finland in London held a high profile climate seminar at the official residence of Ambassador Markku Keinänen on Tuesday 10th of September 2019. The event was part of a larger Finnish EU presidency related programme organised by the Embassy. The event’s purpose was to present the climate objectives of both the Finnish Government and Finland’s EU Presidency, as well as create connections with British climate professionals and to find channels for cooperation between the two countries.

The main speakers for the first half of the event were the Minister for Foreign Affairs of Finland Pekka Haavisto, the UK’s Minister for Climate Change Lord Duncan of Springbank, the Secretary-General of the World Meteorological Organization Professor Petteri Taalas and the Head of Unit for International and Inter-Institutional Relations at the European Commission's Directorate-General for Climate Action Elina Bardram.

Read more: The Embassy of Finland in London held a climate seminar with ministerial level speakers from Finland and the UK

Upcoming events of Team Finland members can be found here:

The Finnish-British Chamber of Commerce

The Finnish Institute in London

If you would like to be kept updated on Finnish cultural events in the UK, please send an email to pirjo.pellinen(at)formin.fi. Thank you!