Seyi Akiwowo is the UK recipient of HÄN honour in 2021

Finland is championing the gender-neutral Finnish pronoun “hän” to promote equality around the world and to support and showcase the work done for equality. Finland is presenting Hän Honours to individuals and organisations that are advancing inclusivity. This year’s recipient of the honour in the UK is Seyi Akiwowo, founder and CEO of Glitch for her work on battling online harassment.

Seyi Akiwowo is a British-Nigerian women's rights activist and campaigner and a multi award winning founder and CEO of a newly formed charity, Glitch. Glitch’s mission is to awaken a generation of digital citizens equipped to create and demand for safe online spaces for all.

Akiwowo founded the charity during her time as a local politician in East London (2014-2018), after she faced hideous online abuse and violence. Using her lived experience on expertise, Seyi co-designs practical solutions with Governments, NGO’s, UN Human Rights Council and tech companies to protect public online spaces from hate and abuse. Seyi is an expert workshop and training designer and facilitator, delivering training for over 10 on political leadership, democracy and inclusion.

In 2020 George Washington University appointed Seyi a Knight Fellow of the Institute for Data, Democracy and Politics and she also sits on the Guardian Council Yoti. She has delivered talks at TEDex London, European Parliament, United Nations and has written several critical pieces for The Telegraph, Maria Claire and Huffington Post. She is also London School of Economics Alumni and Gates Foundation Global Goalkeeper.

Finnish Ambassador Markku Keinänen said: ‘Equality is a core value for Finland and its people. Finland wants to highlight the important work that is being done every day to promote equality in society, around the world. I am delighted to present this year’s UK HÄN honour to Seyi Akiwowo for her work.’ 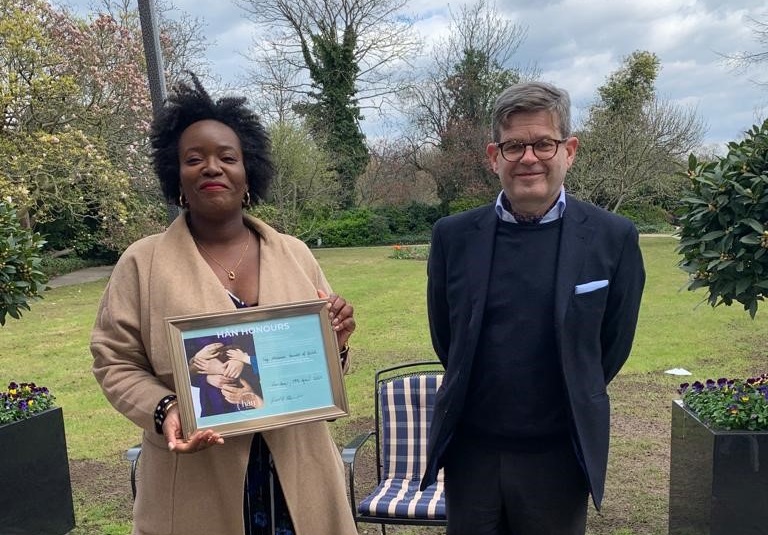 Hän is a powerful word, a Finnish personal pronoun that refers to “he,” “she,” or any other gender, all at the same time.It is worth spreading the word about this word because it is inclusive and stands for equal opportunity. That’s why Finland believes in introducing hän, and the philosophy behind it, to the rest of the world. (The ä is pronounced like the a in “at.”)

Finland strives to be an egalitarian society where everyone is equal regardless of factors such as background, appearance, sexuality or gender.

Finland’s embassies around the world are selecting local individuals, projects and groups for official recognition. The goal is to thank them for promoting equality and inclusivity in various sectors of society.

It’s important to work with and recognise others around the world who are working towards the same goal. Finland is presenting the Hän Honour as a special recognition of commitment to advancing inclusivity. So far, some 20 individuals and groups around the world have received this honour.