Fintan is a character of Embassy of Finland in Tokyo/Japan. This approximately 7-year old boy has blond hair and a pair of blue eyes. He is proud of his home country and thu 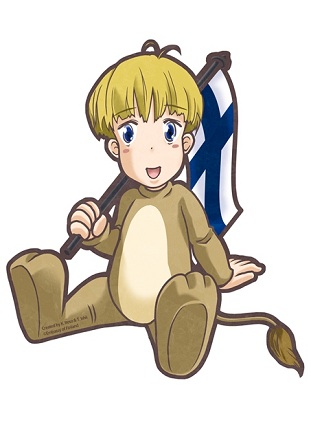 s always carries a Finnish flag with him. He also likes to wear a lion costume. Lion is the symbolic animal of Finland, although for most of the time lions find Finland a bit too cold a place.

Fintan can be best found on Embassy's Twitter account (@FinEmbTokyoLink to another website.), where he shares all kinds of information of his home country. The Twitter account was opened late 2011. Fintan made his first appearance in the spring of 2012 when Japan’s national broadcasting company NHK's Twitter account (@NKH_PRLink to another website.) started to call the Embassy account “Fintan”. The name Fintan comes from the words Finland and tan, which is a modern pet-name similar to “chan”. Fintan got his looks from Kenji Itoso, a Japanese creative director and Tomohiro Ishii later in 2012.

To our knowledge, Fintan was the first drawn Embassy character used in social media. With his more than 160.000 Twitter followers he hosts one of the most popular Embassy Twitter accounts in the world. He has been featured in a number of newspaper, online and television stories.