Nepal is a fragile state, and one of the poorest and least developed countries in the world. In Finland’s support to Nepal the focus is on access to clean drinking water and sanitation, developing education, and improving the influence of women and other groups that are in a vulnerable position. 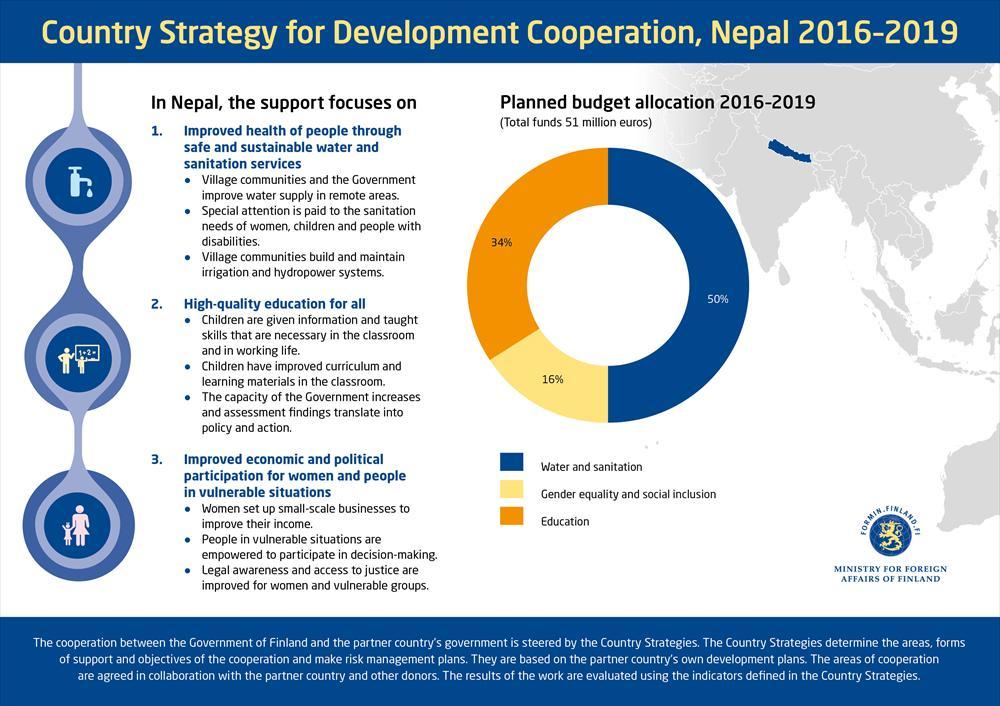 In recent years Nepal has succeeded in significantly reducing extreme poverty. The new Constitution adopted by the Parliament of Nepal in autumn 2015 is an important step forward in democracy development.However, inequality among the citizens is still a serious problem that slows down the development.

Finland has had development cooperation with Nepal since in 1983. Most of the Finnish projects are located in peripheral areas where there are few other helpers. Support is targeted especially to people who are in the weakest position.

Finland supports Nepal by a total of EUR 50 million in 2016-2019. In addition to this, support is to be allocated via the Finnish civil society organisations.

Companies are encouraged to make use of various commercial and economic instruments and operators, such as Finnpartnership's matchmaking services and the Public Sector Investment Facility (PIF). The Finnish-Nepalese Alumni Association functions as an important channel of information and creates contacts between Nepalese and Finnish companies.

The work of the civil society organisation is concerned with improving education, health, rights of the developmentally disabled and food security, as well as developing livelihoods and competence in various fields.

Natural disasters are a significant risk: floods and landslides occur on an annual basis and earthquakes are to be expected.

The risks of development cooperation are managed by means of systematic monitoring of projects and programmes, strengthening the competence of Nepal in the management of finances, and dialogue with the partners and the country’s administration. The aim is also to improve the citizens’ opportunities to influence the country’s development.

Finland continues the efforts to integrate contingency planning and work on disaster risk reduction (DRR) into all programmes and activities in Nepal. The importance of climate change adaptation is stressed especially in the Finnish water and sanitation projects.

Support to the Ministry of Education of Nepal for developing curricula and teaching materials, Finland’s support EUR 1.7 million in 2016–2019.

Finland supports the water, sanitation and hygiene and the education sectors of UNICEF's Country Programme Action Plan 2018–2022 (CPAP) by EUR 8 million in 2018–2022. The support will promote sustainable and equal development in Nepal by improving access to water and sanitation, upgrading the quality and coverage of education, and strengthening the position of women and girls.

Tell us about any alleged misuse in development cooperation

We take all suspicions of misuse of Finnish development cooperation funds seriously. You can report any suspicions about the misuse through our service. Misuse may be due to carelessness or lack of professional skills, be deliberate or even consist of actions or negligence that fulfill the elements of a criminal offence.