Finland and Namibia have exceptionally good and long relations. Namibia is the only country in Africa with whom Finland has such a special bond. In 2020, we will celebrate the friendship that has lasted for 150 years. 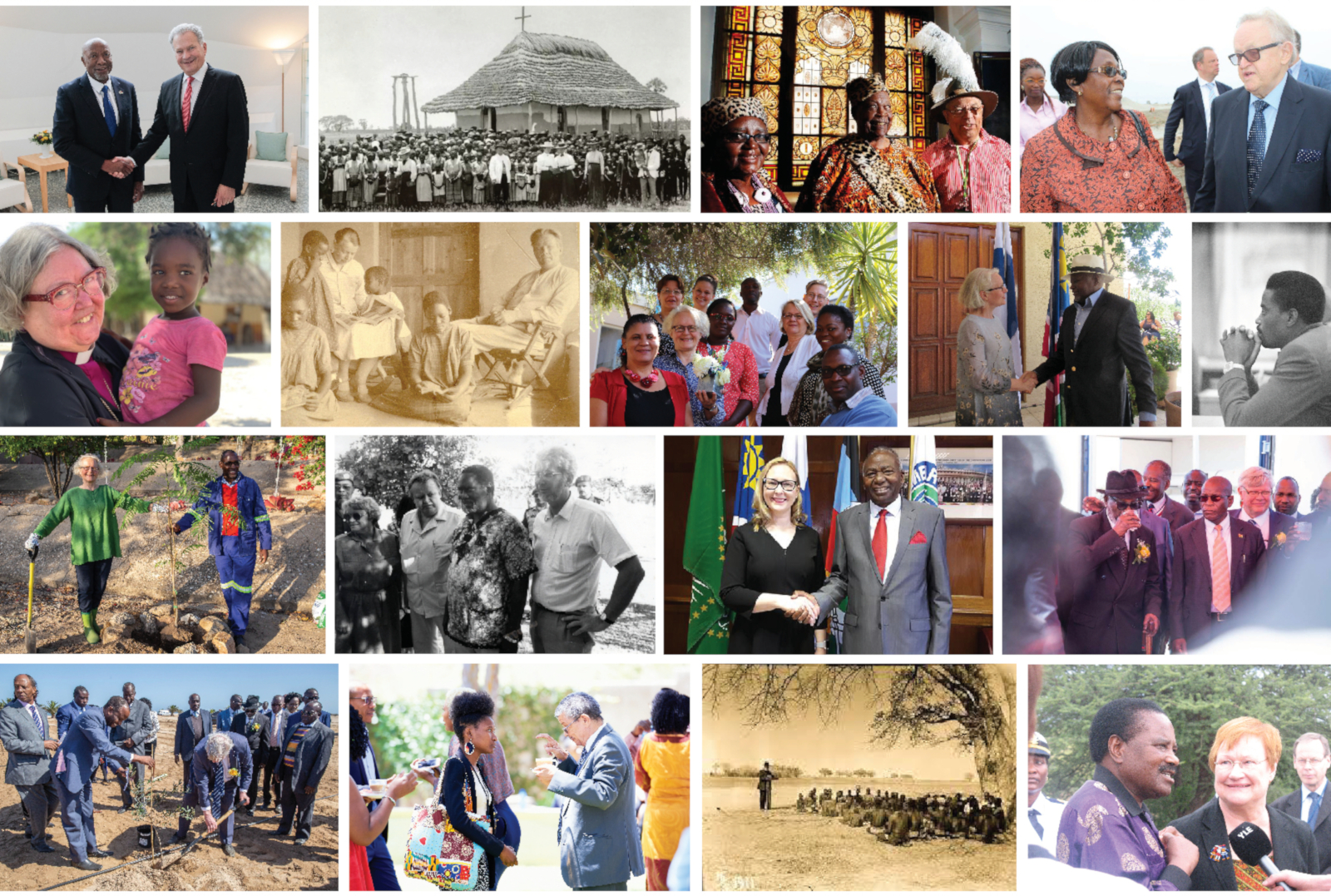 The anniversary year was kicked off(Link to another website.) (Opens New Window) in December 2019. The whole staff of the Embassy of Finland in Windhoek travelled to Ondangwa to host a memorable event, also honoring the 102nd anniversary of Finland’s independence.

“We Finns set a high value on the unique history we have with Namibia and on the numerous friendships, which we have built with Namibians during the decades. Our countries and peoples are truly close to each other,” Ambassador Pirkko-Liisa Kyöstilä said while opening the celebrations. 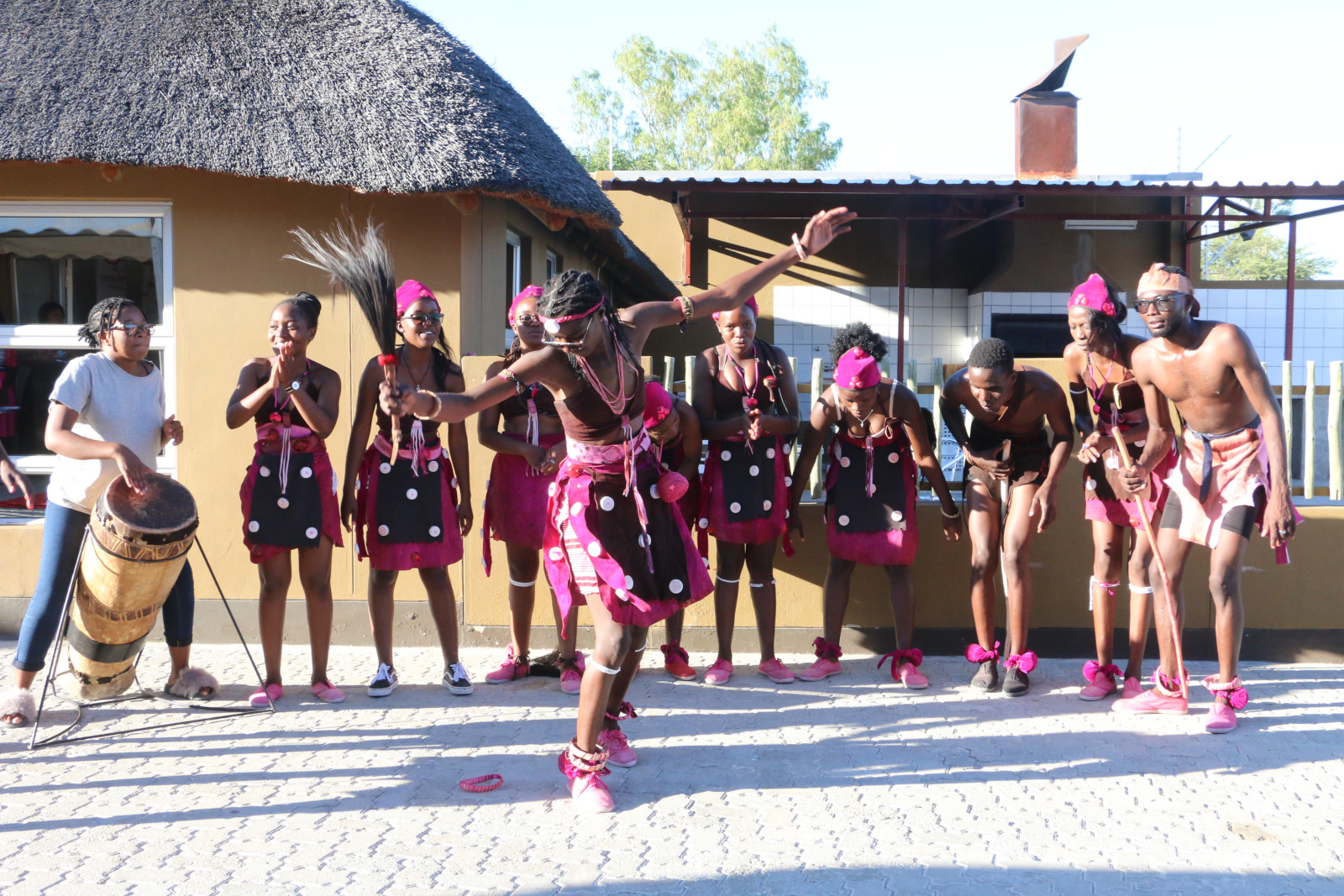 H.E. Dr. Nangolo Mbumba, Vice President of the Republic of Namibia, was the guest of honor together with Madame Mbumba. H.E. Dr. Sam Nujoma, Founding President and Father of the Namibian Nation, was also present. In addition, several ministers and deputy ministers as well traditional leaders arrived to celebrate the long-lasting friendship of our two countries.

At the event, Ambassador Kyöstilä launched a book titled “Intertwined Histories – 150 years of Finnish-Namibian Relations”(Link to another website.) (Opens New Window). The collection of essays is published by the University of Turku and edited by Dr. Marjo Kaartinen, Dr. Leila Koivunen and Dr. Napandulwe Shiweda.

Finland and Namibia have an extraordinarily long and close partnership. It began in July 1870(Link to another website.) after a long and tedious journey, when the first Finnish missionaries arrived at their new missionary field in Owambo in what is now northern Namibia. This marked the beginning of an intricate relationship between the Finns and the Aawambo.

The Finnish missionaries were busy developed the area’s education and health care. One of the missionaries, a self-taught anthropologist Martti Rautanen did extensive research on the local Ndonga language. He is well-known in Namibia for creating the literary form of Ndonga. As a result of the pioneer work of the missionaries, the Finnish Evangelical Lutheran Mission (Felm)(Link to another website.) is the longest Finnish instance with a presence in Namibia. Their work has continued uninterrupted in the country for 150 years.

The tight-knit partnership remained unbroken throughout the years of Namibia’s struggle for independence. When the United Nations declared liberation movement SWAPO as the sole legal representative of Namibia in 1973, Finland started supporting the liberation movement directly. As a result, Finland funded the education of dozens of SWAPO scholars in Finnish universities. The aim of the program was to build capacity. Many of these scholarship holders have acted – and continue to act – in high positions within the Namibian Government.

Finland has also played a significant role in the implementation of Namibia’s independence plan through another famous Finnish Martti, President Martti Ahtisaari (in office 1994–2000), who remains a well-known figure in Namibia. In 1989, the last year before independence, President Ahtisaari acted as the United Nations Special Representative of Namibia, heading the UNTAG operation(Link to another website.). Over a 900-member strong battalion of Finnish peacekeepers participated in UNTAG during that time. 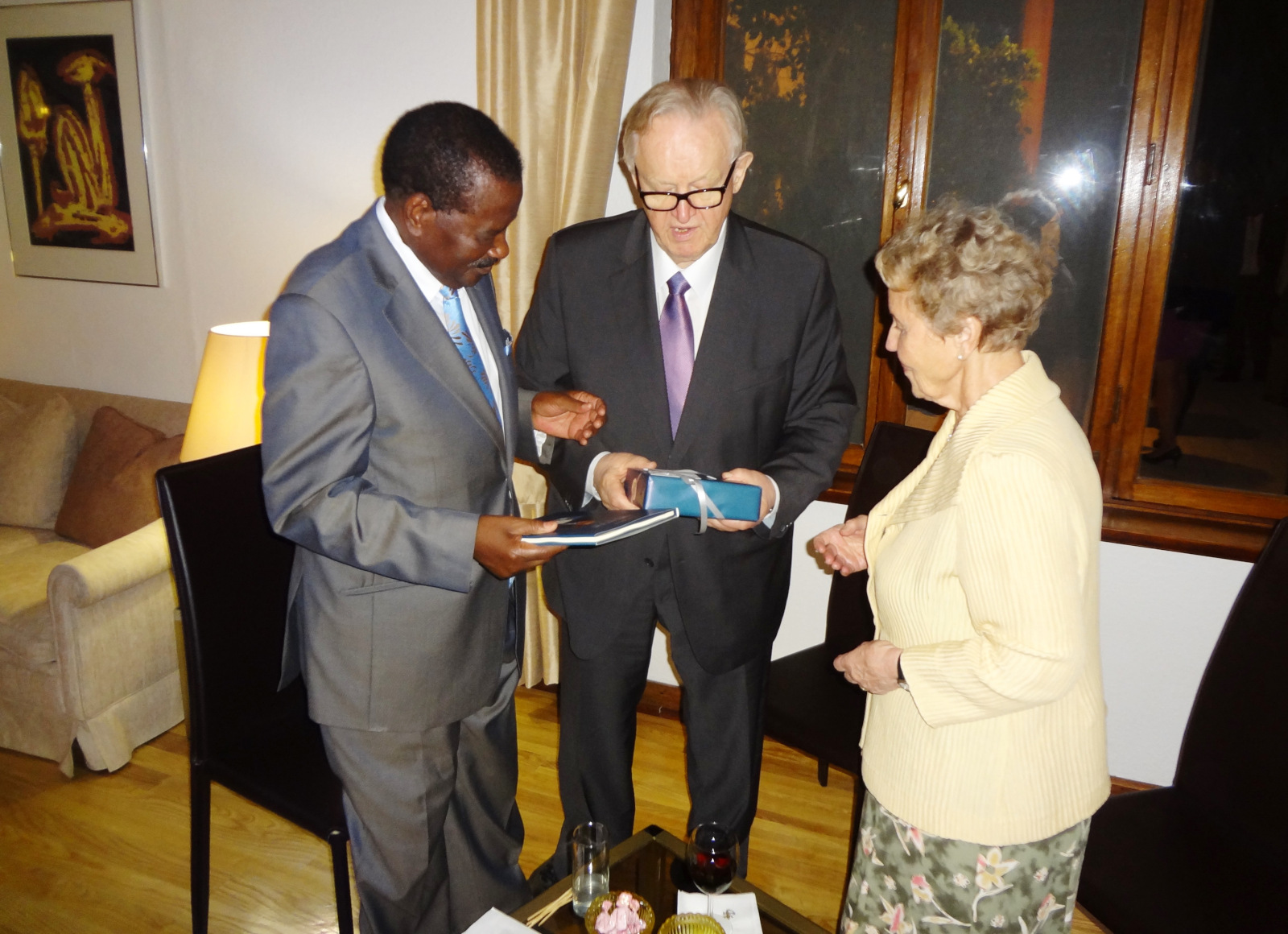 Upon gaining independence in 1990, Namibia became one of the key partners of development cooperation for Finland. Namibia was supported on several sectors, extending from education to health care and from mining to environmental protection. Finnish development cooperation disbursements to Namibia totalled over 130 million euros between 1970 and 2007 when Finland ceased offering bilateral assistance to Namibia. However, this did not mean the end of the relationship. On the contrary, close cooperation has continued ever since. Finland’s focus has shifted from direct governmental assistance to supporting and strengthening Namibia’s civil society and private sector through several development cooperation instruments.

Today, the main priority of the Embassy of Finland is to maintain and strengthen our good political and economic relations. The Embassy also advances business opportunities for Finnish enterprises. In general, Finland is perceived as an engaged and trusted partner in Namibia, which provides a solid ground for the development of business and other opportunities. Furthermore, Finnish technology and expertise are highly valued within the country.

Recurring high-level visits on both sides bespeak a good relationship between the countries. The latest ministerial visit from Finland to Namibia took place in October 2018, when Minister of Economic Affairs Mika Lintilä visited the country together with a large business delegation. Other high-level visits include Speaker of the Parliament Maria Lohela’s visit in 2018 and Minister for European Affairs and Foreign Trade Alexander Stubb’s visit in 2012. President Tarja Halonen made a state visit to Namibia in 2011. 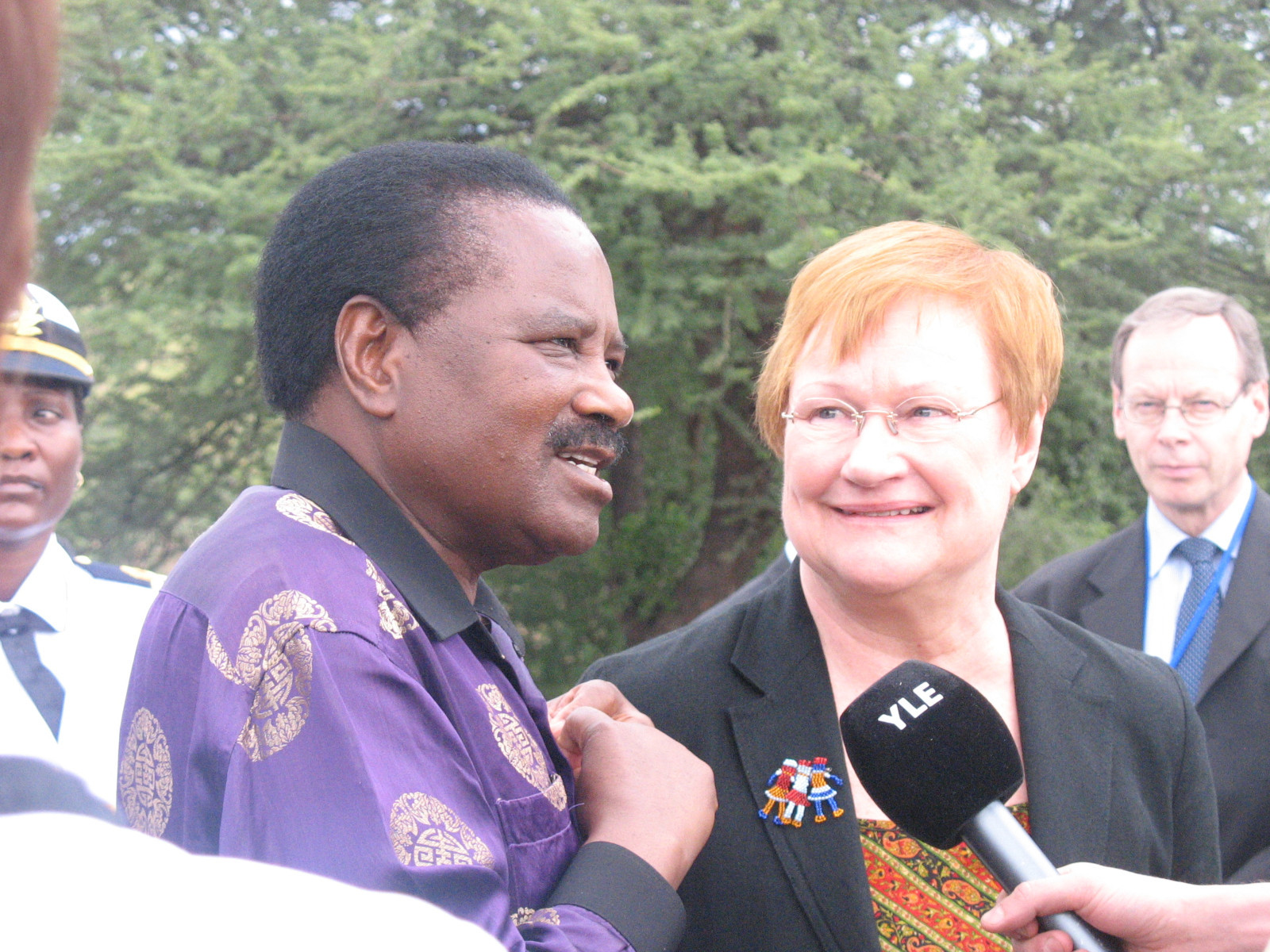 Most recently, the Namibian Vice-President, H.E. Nangolo Mbumba, visited Finland in September 2019. Other visits include Speaker of the National Assembly Hon. Peter Katjavivi’s visit in 2017; Minister of Higher Education, Training and Innovation Hon. Itah Kandjii-Murangi’s visit in 2016 and Minister of Trade and Industry Hon. Calle Schlettwein’s trade mission in 2014. The last state visit from Namibia to Finland took place in 2013 when the Namibian President, H.E. Hifikepunye Pohamba, travelled to Helsinki.

Presently, circa 20 Finnish enterprises have either a Namibian business partner or distributor. Some large-scale Finnish enterprises also operate from South Africa. These include Nokia, Metso and Wärtsilä. One of the largest Finnish investments is Outotec’s sulphuric acid plant in Tsumeb. The total value of the deal was 200 million euros. Another noteworthy deal is a deep-sea fisheries research vessel RV Mirabilis built by STX Finland’s Rauma shipyard in 2012. The vessel was acquired by Namibia’s Ministry of Fisheries and Marine Resources. 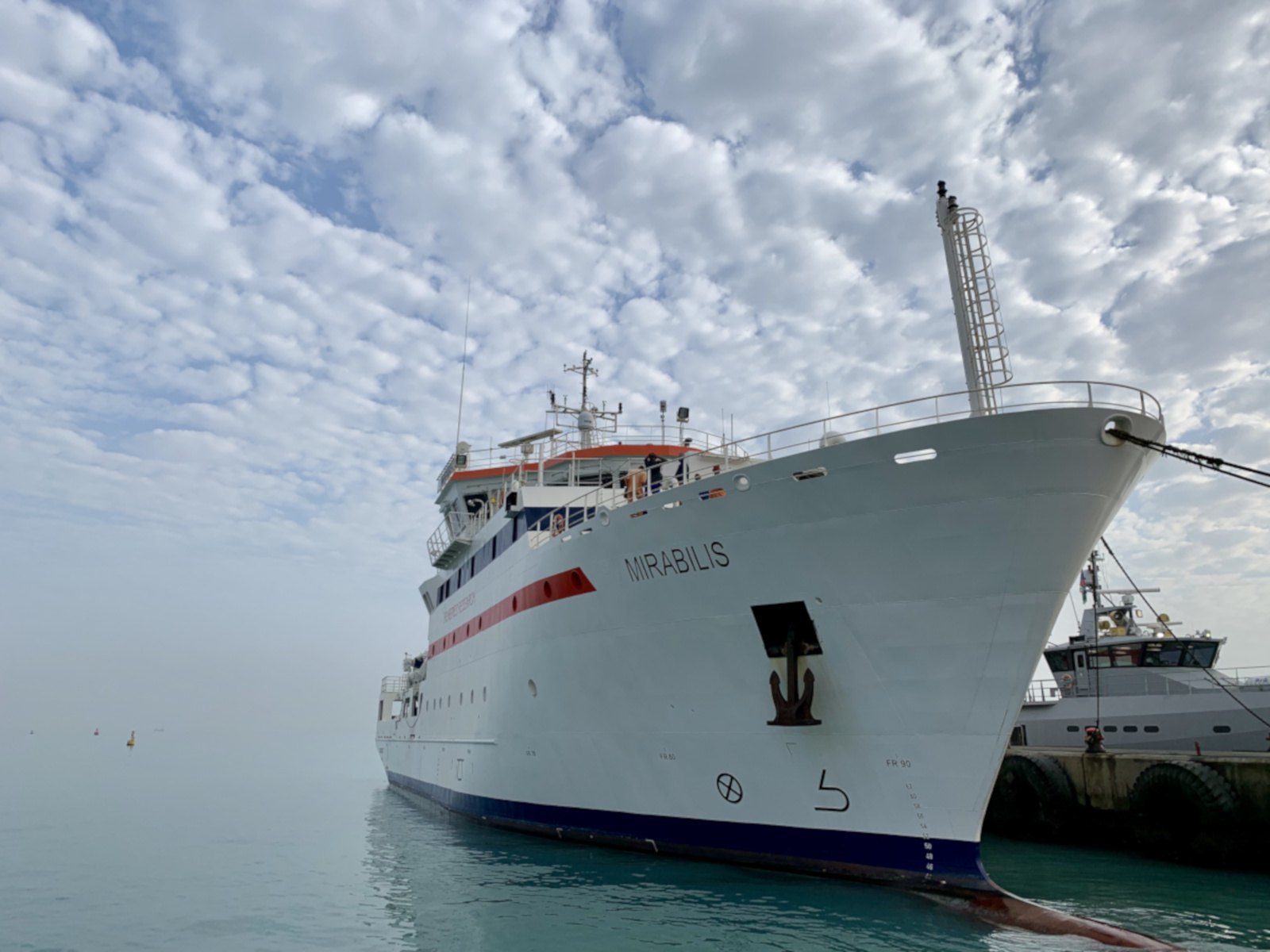 Finland and Namibia have a bilateral investment treaty which has been in effect since May 2005.

The cooperation between Finns and Namibians has been particularly successful in Namibia’s education sector. Nine Finnish higher education institutions have cooperated with the University of Namibia (UNAM)(Link to another website.) and 12 institutions with the Namibia University of Science and Technology (NUST)(Link to another website.). Furthermore, student exchange programs between the Finnish and Namibian universities have offered numerous students the access to international study and networking opportunities.

In recent years, Namibia has benefitted from the regional development programmes funded by Finland. The aim of the Energy and Environment Partnership (EEP)(Link to another website.) is to improve the energy supply and security of households in the region. Several energy sector projects have taken place in Namibia within the programme. One of them is a biogas plant by the Finnish enterprise Doranova.

Other examples of regionally funded projects include BioFISA(Link to another website.) and SAIS2(Link to another website.). BioFISA is a development programme of biological sciences which ended in 2019. The aim of the project was to create long-lasting research and innovation cooperation structures to southern Africa as well as to commercialise new products and services in the field of agriculture and health. SAIS2, on the other hand, is an innovation support project whose aim is to strengthen the regional cooperation between the southern African countries within the innovation sector. Their project office is situated in Windhoek. 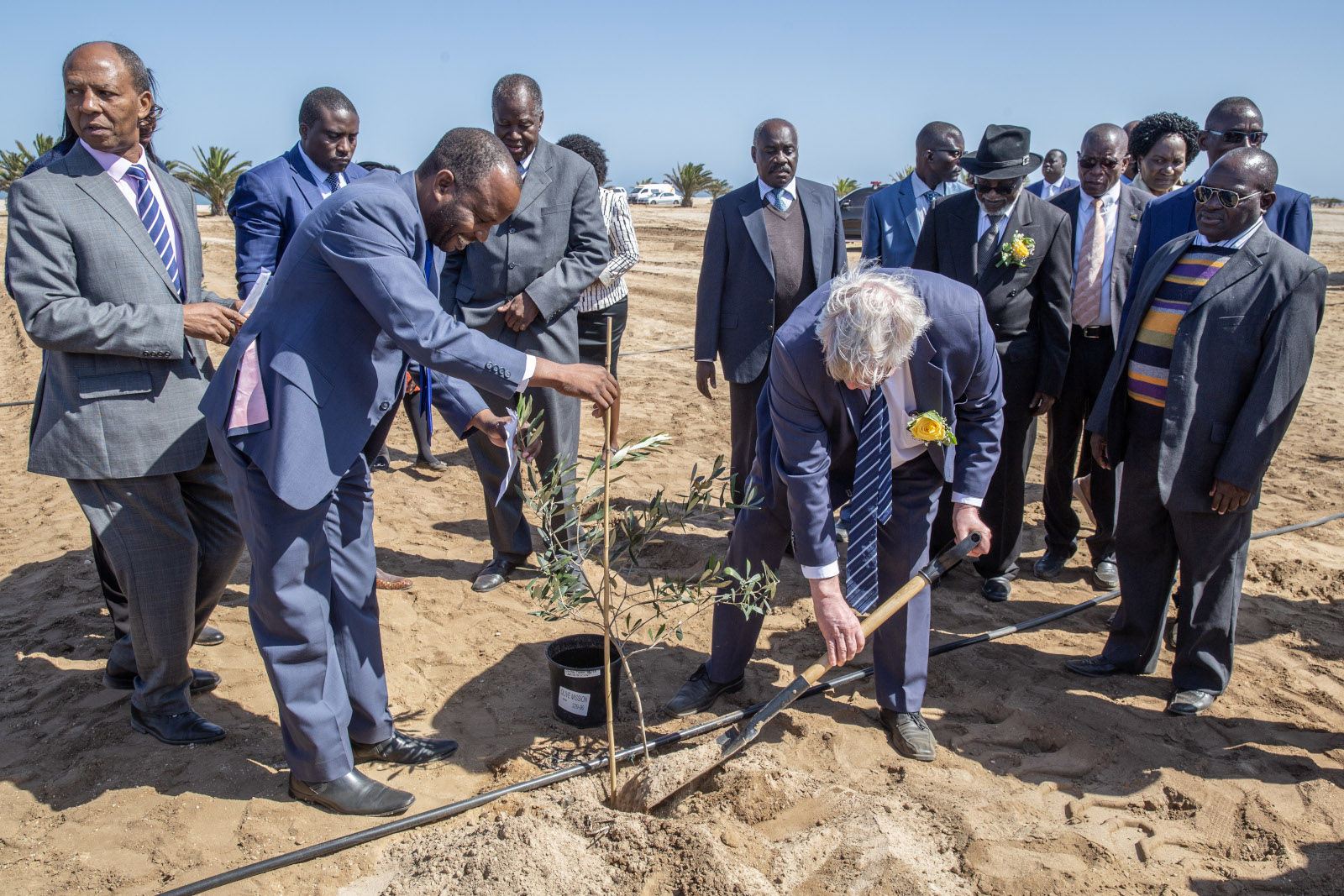 Other planned projects include an education project in civil aviation together with a Finnish AiRRhow alliance(Link to another website.) in Pirkanmaa, Tampere. A consortium, headed by Tampere University(Link to another website.),  has been formed to investigate the possibilities for cooperation in aviation industry between the two countries. Promising prospects for cooperation can be found for example in airport construction, aircraft maintenance, and aviation safety.

Furthermore, the United Nations Industrial Development Organisation (UNIDO) has an ongoing project Promoting Sustainable Bush-Processing Value Chains in Namibia(Link to another website.), which is investigating the utilisation of invasive bush species, particularly acacia and sicklebush, in the production of animal feed and charcoal. Finnish enterprises are involved in the project.