Special Adviser Chudamani Joshi is well-known for his knowledge of forests and plants, but also for almost any topic concerning Nepal. Chudamani joined the Embassy of Finland in Kathmandu in 2009, this autumn he will retire.

​When I started working at the Embassy one year ago, I had many questions every day about Nepal. In most cases, I would get the reply “ask Chudamani, he knows". Chudamani Joshi is well-known for his knowledge of forests and plants, but also for almost any topic concerning Nepal. Chudamani joined the Embassy of Finland in Kathmandu in 2009, and he has worked as the Embassy's Special Advisor on water and sanitation since 2014. This autumn he will retire.

Chudamani was born in a remote mountain region of Far West Nepal, in the village of Jhigni, in Dadeldhura. As all the other women in the village, Chudamani's mother was forced to deliver in a chhau hut, a cowshed/small hut, since the entire region practiced chhaupadi – an ancient, harmful tradition that isolates girls and women for the days they are menstruating or when delivering a child. The practice has exposed women and girls routinely in the past to cold weathers, animal attacks and for heightened risk of sexual violence. Chudamani's mother, married at the age of six, delivered altogether twelve babies in a chhau hut, only four survived. Chudamani was fortunate; he was born during the summer.

Chudamani also considers himself lucky because he had the opportunity to attend a nearby school. The school was a two-room 'building'; one room was allocated for the headmaster and school administration, and the other one for the pupils. Chudamani remembers there being around 40 children of different age group and grade.

Chudamani graduated as a biologist in 1985 in India, and was soon after that working for the Ministry of Forest and Soil Conservation in Kathmandu. He was sent to explore species of plants and forests to his childhood region in the Far West – or what was left of them. Initially a dense forest, his childhood forest had been destroyed over the years for cultivation purposes and for the use of timber companies, causing many species to become extinct in the area.

In 1995, Chudamani got an opportunity to work as a technical expert for a Finnish forest project managed by Metsähallitus as they were conducting a National Forest Inventory in Nepal in collaboration with the Government. This was Chudamani's first interaction with Finns. He says he started to understand the Finnish society through this project. “Finns do not appear perhaps welcoming at first – they are not very social – but once you become friends, it lasts forever", Chudamani says. He is still in contact with the Finnish experts he worked with during the project. 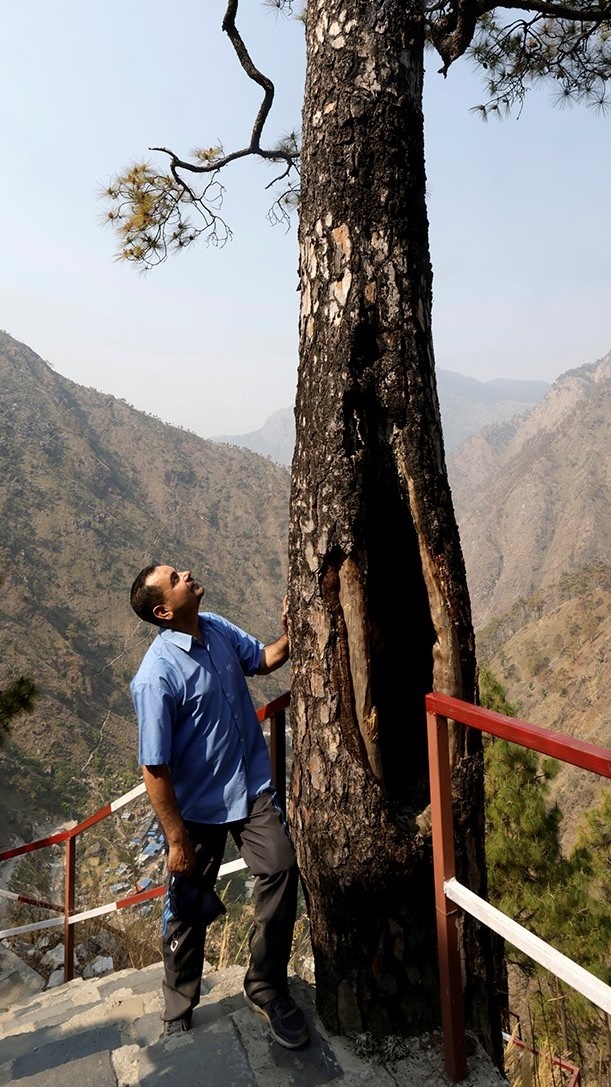 Special Adviser Chudamani Joshi gazing at Pinus roxburghii (commonly known as chir pine) during a field visit to Apihimal Rural Municipality, in April 2022. When Chudamani visited the area for the first time, the trees were untouched. After the area became accessible by road, commercial companies started to collect the resin of trees by carving the tree base. As resin is highly inflammable, the trees are extremely vulnerable to damage during forest fires. Photo: Liisa Takala

In the late 1990's, Chudamani by coincidence ended up studying Ecology, Application of Remote Sensing and Geographic Information System in the Netherlands, where he also decided to stay to pursue his PhD. After finishing his doctorate and working for a while as a post-doctoral researcher, he joined the Embassy of Finland in Nepal in July 2009.

Chudamani initially worked as a Program Coordinator at the Embassy, looking after the bilateral development cooperation projects of the forest sector particularly, and later the water supply and sanitation sector projects.

When asked if Finland is doing the right things in development cooperation in Nepal, Chudamani says that although Finland is a relatively small donor, compared to the big players like the World Development Bank or USAID, the way Finland is using its funds really gives value for the money spent. “Finland's projects are very strategic, their impact is significant, and also visible at the local level. The way Finland is working with the local governments and the communities is something remarkable", Chudamani says.

Finland's long-lasting water and sanitation project in the Far-West, which has been running since 2006, is now phasing out while new ones are starting. The project is very special and close to his heart, coming from the region himself and knowing the communities well. “Working for this project has given me a lot of opportunities to understand my community better", Chudamani says.

When asked about the changes Chudamani has witnessed over the years, they seem drastic. “I was born in a cowshed. Now, children are no longer born in cowsheds, not even in the remote communities. Nepal is open defecation free, and even though some challenges remain, most people have access to water from their own yards and they also have more possibilities to earn some money, for example through livelihood support programmes", Chudamani emphasizes. It is also worth noting that the literacy rate in Nepal now is almost 70 percent, while in the beginning of the 1980s when Finland started its development cooperation, it was only 20 percent.

In the mid-1990s, the World Bank published a report forecasting that if forest degradation continues, Nepal would be a desert in 20 years. Soon after, a Forestry Master Plan was developed with the help of the Finnish Government. By 2016, reforestation in Nepal had started to take effect. “The Biodiversity situation has also improved but there is still plenty to do", Chudamani notes. ​

Chudamani also brings forward that Finland's water projects are not just water projects; they have changed the society entirely, the social behavior change has been massive in the working areas. For example, a key component in the Finnish water project has been the user committees that are formed to govern the water management of the communities. The committees are comprised of women, men and people from different castes and backgrounds – everyone is included. The committees have institutionalized good water governance at the community level. Additionally, the project's women targeted interventions have served to empower women from the confines of cultural and social expectations. Chudamani sees himself as a real eyewitness of how the communities have changed in the past 40 years.

Chudamani describes the Finnish working method as a soft approach; “you respect the norms and the values of the society". He highlights the adaptability and high flexibility of Finns, noting that this is very important in a country like Nepal, where plans and things change rapidly. Moreover, he feels that Finns also like to work with the Nepalese.

When asked about his retirement plans, it feels like this man is not planning to retire, except from the Embassy work perhaps. Chudamani says he has several options; he could write scientific articles about forestry and plant science, and especially about biological diversity, or to support his daughter in Australia with her house-building project. Alternatively, he notes that he could do something with his family land in the Far West, or perhaps even do some short-term consultancy work in his sector of expertise. To conclude, it seems Chudamani will not get bored during his retirement days, and he will surely still get many questions to answer.

On behalf of the Embassy of Finland in Kathmandu, we would like to thank Chudamani Joshi for his valuable advice on ever so many topics, as well as for his friendship – best of luck with new adventures!​