National epic “The Kalevala” reaches the respectable age of 175 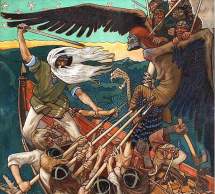 Finland’s national epic, the Kalevala, will be 175 years old this year. This major work compiled by Elias Lönnrot has had a strong influence on Finnish culture and national identity. Kalevala Day will be celebrated in Finland on the 28th of February.

The first edition of the Kalevala saw the light of day in 1835. Elias Lönnrot (1802-1884) prepared an extensive poem out of the folk poetry that he noted down during his travels in Finland and Karelia between 1828 and 1835, after listening to locals singing the verses. Lönnrot dubbed his poem Kalewala taikka Wanhoja Karjalan Runoja Suomen kansan muinosista ajoista (The Kalewala or Old Karelian Poems about the Ancient Times of the Finnish Folk) and its foreword was dated February 28, 1835.

The Kalevala as a building block for national identity

For Finnish intelligentsia the Kalevala became the emblem of the nation’s past, nationality, language and culture; a foundation on which national identity was to be built. At the time of the Kalevala’s publication, Finland had been an autonomous Grand Duchy within the Russian Empire for a quarter of a century. Prior to this, up until 1809, Finland had constituted a part of the Swedish kingdom. The publication of the Kalevala also drew interest from abroad and brought the small and hitherto little-known people to the knowledge of other Europeans. The Kalevala was considered an epic comparable to Homer’s Iliad and Odyssey and the ancient Scandinavian Edda.

Translations followed: the Kalevala was translated into Swedish in 1841 and the French edition appeared in 1845. The poem was soon designated as the national epic of the Finns. After his collection of poems had further increased in quantity, Lönnrot put together a new, extended edition of the Kalevala and it is the edition that appeared in 1849 that is the national epic known to all Finns.

The most translated Finnish work and a source of inspiration 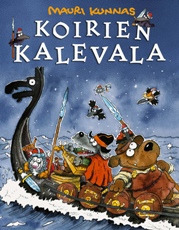 Ever since it was published, various art forms such as music, literature, visual arts, theatre, and dance have drawn inspiration from the Kalevala, and it has functioned as a basis for opera as well as graphic novels. Mauri Kunnas’ Canine Kalevala, as pictured above, portrays the adventures of canine characters in the spirit of the Kalevala, but adapted to reflect the author’s own, playful interpretation of the story.

Kalevalan metaphors are frequently employed, for instance in political rhetoric.

The Kalevala begins with a creation myth that portrays the world as having been born of a pochard’s egg. In other respects the epic tells stories of dispute and expeditions of retaliation and proposals of the peoples of Kaleva and North Farm – as well as of the construction and theft of the magical Sampo. What is characteristic for the epic is the so-called trochaic tetrameter (also known as Kalevala meter) in which the verses follow a particular line of four trochaic feet.

Of the Kalevala’s characters, the most well known are Väinämöinen as the central figure of the epic, his ill-fated rival Joukahainen, Aino and Kullervo who are destined for a tragic fate, heroic artificer-smith Ilmarinen who crafted the Sampo, and Louhi, the Hag of the North.

Kalevala Day is celebrated in Finland on the 28th of February, in honour of the day on which the Old Kalevala’s foreword was dated by Lönnrot (February 28, 1835). Kalevala Day is an official flag-raising day in Finland, and simultaneously the Day of Finnish culture.

Kalevalan influence has taken a steady hold of Finnish culture, and is evident in the names given to town districts, streets, companies and various products. Many of the Kalevalan characters’ first names are also still in use today, including Aino, Sampo, Kyllikki, Kalervo, Kullervo, Antero and Väinö. Aino has been amongst the most popular female names for years. The man who compiled the epic appears to have inspired Finnish parents: in 2008 Elias was the fourth most popular name given to a boy.

Theme of the jubilee year: Kalevala of My Mind

The theme for the Kalevala’s 175th anniversary, Kalevala of My Mind, aims to highlight the Kalevala’s poetic character and its openness to interpretation. The theme seeks to encourage Finns to (re)discover the Kalevala and to present their own analyses of the epic, its poems and its events. Indeed, the Kalevala begins with verses in which the poem’s narrative voice relates its wish to sing alone as well as together with others:

It is my desire,
it is my wish,
to set out to sing,
to begin to recite,
to let a song of our clan glide on,
to sing a family lay,
The words are melting in my mouth,
utterances dropping out,
coming to my tongue,
being scattered about on my teeth.

Beloved friend, my boon companion,
my fair boyhood comrade,
start now to sing with me,
begin to recite together
now that we have come together,
have come from two directions.
Seldom do we come together,
meet one another
on these wretched marches,
these poor northern parts.

The jubilee year’s symbol, Kalevala palaa (in English either “burns” or “returns”, depending on the context) describes how the Kalevala never ceases to find its way back to Finnish people’s everyday life as well as their celebrations. It affects everything from speeches, parlance and rock lyrics to film, graphic novels and names; it can be heard in popular music and seen in dance choreographies and architecture.

On Kalevala Day February 28, 2010, a website designed for comprehensive school pupils will be launched. The website that goes by the name Kalevalan kankahilla will introduce pupils to the adventures, characters and milieu of the Kalevala. The tasks to perform will induce children to immerse themselves in the heroes’ journey and simultaneously contemplate what the Sampo of our days would be like. The website will launch at www.kalevalaseura.fi(Link to another website.) (Opens New Window).