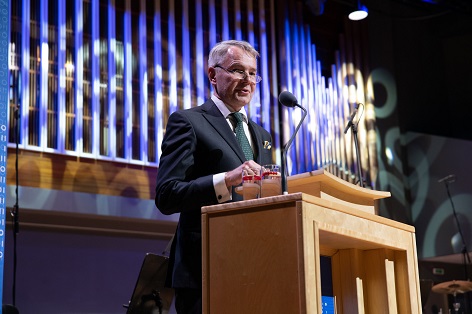 I want to thank Estonian friends for having this opportunity to commemorate the 100th Anniversary of the Tartu Peace Treaty, in this beautiful Estonian town, which gave birth also to the Peace Treaty between Finland and the Russian Soviet Republic.

The signing of the Treaties of Tartu consolidated the birth of two new nations, Estonia and Finland, in the aftermath of the First World War and the Russian revolution. The Tartu Peace Treaties are part of our common history.

At the time, there was a lot of controversy in Finland on the negotiations and on concluding the Peace Treaty. The debate was heated - what is reasonable, what is realistic, what is achievable?

There were opinions hoping our negotiators to choose a tougher stand, while some preferred a softer line.

“The members of the delegation felt wistful to leave Tartu, where we had spent so many months with friendly people.”

“The train left, and by noon, we reached Tallinn. The Estonian government had invited us for lunch, where we could renew our spring acquaintances and express our gratitude for having enjoyed the hospitality of the Estonian people for over four months.”

The Tartu Peace Treaty was fundamentally important for newly independent Finland. It formally ended the state of war. The Treaties of Tartu also stabilized the situation for Russia, which was diplomatically isolated that time.

Several decades later, in 1975, the idea of sovereign states with stable borders, enjoying peaceful cooperation with neighboring countries, was enshrined in the Helsinki Final Act. Today, those Helsinki Principles are as important as ever. Even more so, as the borders have been violated again in Europe.

Finland´s Treaty of Tartu is preserved in the Archives of the Foreign Ministry in Helsinki. The paper of the Treaty has become fragile, but the ink remains readable, and tells about the significance of the Treaty.