Suvi’s story in Cyprus began after she met a Cypriot man with whom she got married in 1994. Their first child was born in 1995 and after a couple of years of living in Finland, the family with two children at the time moved permanently to Cyprus in 1998.

Suvi heard about the open position from an employee of the Honorary Consul of Finland, Mr. Costas Severis, and applied for the job.  According to Suvi, she was interviewed by the Honorary Consul General Mr. Demosthenis Severis and Human Resources Manager of the Embassy of Finland in Tel Aviv at the time Ms. Paula Valpas. After receiving the job, Suvi promised to be sharp in Nicosia as Paula was alert in Tel Aviv. (Suvi’s surname Terävä translates in English as ‘sharp’, whereas Valpas means ‘alert’.)

Suvi holds a degree in tourism. However, early on Suvi discovered that the working days in the tourism industry were too long for her taking into account her role as a mother. Working at the embassy suited the family situation better.

"I have been thankful for the opportunity to work in my native language in a Finnish work community with a familiar working culture that has clear working hours and an equal way of working. The Embassy has a pleasant work community to which the lovely young interns bring new energy. In addition to the Finnish, Cypriot and Filipino colleagues, the personnel of the Swedish Embassy who share the same office space have become an important part of everyday life. I enjoy working in an international environment."

During the past decades, Cyprus has modernized in many ways. According to Suvi, even though Cyprus is still in many ways a more traditional society than Finland, it has become more open along the years. For instance, the position and rights of women have improved. Suvi also sees an improvement in the treatment of animals.

"When I first came to Cyprus, dogs were not considered as pets. Now they fortunately are, and for instance, many pet stores have opened. Yet unfortunately, you still see badly treated animals. The fact that young men participate in domestic work a little more than the previous generation is delightful. Before grandmothers and mothers used to take care of the children, but now women have been increasingly participating in the working life as well and new kindergartens have opened."

Suvi was the first and only Finnish employee of the Honorary Consulate General in Nicosia.

"My work tasks varied and I took care of all kinds of things. Along the years, the work has taught me how to do it. In the Honorary Consulate General, my work consisted of e.g. all consular services handled in Cyprus, including matters on entry to Finland and commercial inquiries concerning Finland."

After starting to work for the Embassy of Finland in Cyprus, from 2004 to 2014 Suvi became responsible for issuing passports to Finnish citizens, processing Schengen visas to Finland and Sweden and keeping contact with the Finnish community in Cyprus. Since the opening of the Embassy, also decision-making was transferred from Tel Aviv to Nicosia in Cyprus.

"Since 2014, I have worked with administrative and consular services. When starting in my current position, economic, information and human resources administration, consular services, crisis preparedness (considering the location of Cyprus close to the Middle East), elections and notary services became my responsibilities. My responsible position is reflected also in the fact that while the Ambassador is out of country, I ensure the functioning of the Embassy." 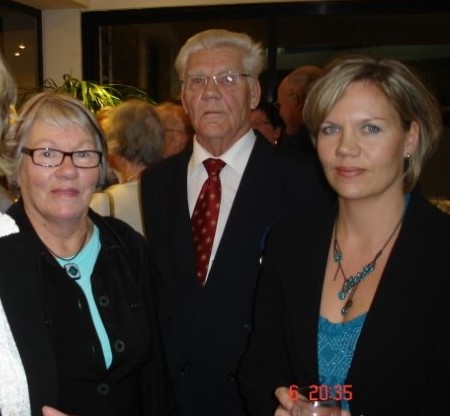 Suvi with her parents at Finnish Independence Day reception in Nicosia, 2006.

The EU membership of Cyprus brought many changes

Since 2004 when The Republic of Cyprus received EU membership, the country began following EU legislation and regulations. This lead to many changes. The tightening of rules was apparent also in Suvi’s work.

"For example, previously a person who had lost their passport could return to Finland with a written statement confirming their identity issued by the Honorary Consulate General. Nowadays travelling abroad always requires a passport or an identity card. However, luckily the Embassy of Finland in Nicosia can issue a temporary passport quickly if necessary."

EU membership and the consequent opening of the Embassy of Finland in Cyprus meant the arrival of an Ambassador to Cyprus. A present Ambassador naturally has more opportunities e.g. to network and to follow the negotiations related to the Cyprus problem, as well as to promote the commercial and political cooperation between the two countries.

"Since the opening of the Embassy, we have been able to participate more actively in events promoting the country image of Finland such as education fairs. To me personally, it has been a privilege to be able to follow the work of the Ambassador among my own work tasks."

Suvi eagerly lists many highlights of her work. One of them was the opportunity to meet the late President of Finland Mr. Mauno Koivisto and have a casual chat with him.

"After he was retired, Mr. Mauno Koivisto travelled regularly to Cyprus to play volleyball with his team. Moreover, the visit to Cyprus of the previous Foreign Minister Mr. Alexander Stubb in 2009 and Prime Minister Mr. Juha Sipilä in 2018 were memorable. In addition, it has been a pleasure to celebrate the Finnish Independence Day at the receptions hosted by the Embassy. Moreover, many cultural events organized by the Embassy have remained in my mind."

Then Minister of Foreign Affairs for Finland Mr. Alexander Stubb with the personnel of Embassy of Finland in 2009.

It has been meaningful for Suvi to help Finnish citizens in difficult situations in Cyprus. Especially since the beginning of corona pandemic, the significance of the travel instructions have increased remarkably.

"I felt I was of concrete help when the corona crisis started. For instance, we managed to arrange a repatriation flight from Paphos to Helsinki in cooperation with the Ministry of Foreign Affairs and Finnair. The Finns who had been spending the winter in Cyprus got back to their home country just on time before all the airports closed."

In her work, Suvi encounters Finns in different situations and life stages from birth to death.

"I have also been part of organizing several elections in which we provide the opportunity for Finnish citizens to vote abroad."

The possibility to constantly educate herself and learn new skills at her work is something that Suvi finds valuable and meaningful.

"It is wonderful that I have been able to travel, meet many new people and network with colleagues working in other Finnish and EU Embassies."

A low threshold for interaction

Suvi states that it has been a pleasure to get to know many Finns living on the island over the years.

"Finns living in Cyprus share similar experiences and understand one another. Customer service and interaction has been the best thing about my work. When the customers visit the Embassy, we often talk about casualties and how our family is doing."

One can contact the Embassy with a low threshold also in the future, Suvi promises.

At the time of the interview, on a sunny day in November, Suvi enjoys the sunlight which is not seen in Finland at this time of the year. Even the colder air feels like a reward after the long hot summer which Suvi would prefer to spend in the greenery of Finland.

"I appreciate the convenience of outdoor life in Cyprus as the distances to beautiful excursion destinations are not long. As a mother of three children, I am also happy that life in Cyprus is safe. Nowadays my children are young adults who meet their friends at coffee shops. In my experience, young people in Cyprus do not usually drink to get drunk. I have also become a Cypriot myself in the sense that I enjoy small talk with strangers even on the elevator in the morning."

"About Finland, I miss the four seasons and nature; I am from the beautiful lake landscapes of Savonlinna after all. In the winter season, I miss warm apartments. I also miss relatives and friends as well as rye bread and salty liquorice, of course."

In addition to the amazing beaches, Cyprus has many other things to offer. Suvi recommends familiarizing with Troodos mountains and its beautiful small villages and hiking opportunities. The only divided capital of the world, Nicosia, is worth paying a visit although a wall still separates the two parts of the city.

"In my opinion, Paphos area represents the most beautiful Cyprus. People travelling to Cyprus should definitely rent a car and drive outside the tourist areas. There is a lot to see on the island, such as historical churches and monasteries, mosaics, and wineries."