“We, the Finnish men, have experienced that we benefit greatly from having visionary and powerful women in senior leadership positions. This is a lesson we have learned and we want to share with our friends in other countries”, voiced the Embassy of Finland’s Head of Cooperation Timo Voipio in the publication event of the biography of Ali Hassan Mwinyi, the second president of the United Republic of Tanzania.

In the event held by the UONGOZI institute in 8th of May 2021 in Dar es Salaam, Voipio held the speech completely in Swahili. A translated version of the speech can be read below.

All participants, stakeholders and friends

All protocol observed! - Protocol complied with

I am so glad to have this opportunity to say a few words here today.

I first visited Tanzania as a young man, 36 years ago, when Mwalimu Nyerere was still President of Tanzania. I vividly remember when he left office voluntarily and democratically. Tanzanians elected Honorable Ali Hassan Mwinyi as the second president of the United Republic of Tanzania.

During the 1990s I had the opportunity to work in the Mtwara and Lindi regions. We partnered with local government officials in facilitating participatory planning at village and district levels. I am currently working as Head of Cooperation at the Embassy of Finland here near this hall.

The UONGOZI Leadership Institute has been one of the priorities in Finland-Tanzania cooperation, for more than a decade. This institution is an excellent tool, under the Office of the President of the United Republic of Tanzania, aimed at building and strengthening the capacity of leaders in the country and on the African continent. This is a very important issue for any nation that is seeking to be self-reliant and achieve sustainable development.

We are pleased to see that various institutions in the country have demonstrated a genuine demand for the courses that the UONGOZI Institute is organizing in collaboration with Aalto University in Helsinki.

We are also pleased that Honorable President Samia has confirmed the appointment of Mr. Kadari Singo as the Chief Executive Officer of the Leadership Institute. We trust him. We are still appealing to Honorable President Samia on the appointment of a new Board of the UONGOZI Institute, because according to its Statutes the institution cannot function without a Board.

The President of Tanzania is a woman now. This makes us Finns very happy. We had a female president - President Tarja Halonen - a few years ago. At present, our Prime Minister and half of the other ministers are women. We, the Finnish men, have experienced that we benefit greatly from having visionary and powerful women in senior leadership positions. This is a lesson we have learned and we want to share with our friends in other countries. Here in Tanzania for many years we have supported the United Nations Women's Fund (UN-Women) in a women's political leadership project called "Women Can - Give Them Opportunity".

We have also agreed with the UONGOZI Institute that training for women leaders will be a priority of our partnership. We hope that President Samia herself will be able to contribute to these training programs. No one knows better than You what kinds of knowledge, skills and competencies Tanzanian women need in the top leadership positions.

Today we are celebrating Honorable Retired President Ali Hassan Mwinyi. We thank UONGOZI Institute and (the publishing house) Mkuki wa Nyota. The Memoires of Honorable Mzee Mwinyi's give us a great opportunity to understand better how President Mwinyi led the nation of Tanzania. Future leaders can learn many important lessons from the approaches he used to solve his challenges in his times.

Before I conclude, I would like to take this opportunity to thank President Samia for setting up a Commission to advise her on the realities of the Corona disease and how best to deal with them. We, the development partners, know that Tanzania is one of the best countries for vaccination in Africa. Thousands of health professionals have been trained to administer child immunizations in districts and villages. More than 90 percent of children have been vaccinated against dangerous childhood diseases.

Corona is very dangerous for older men - like me and like Mzee Mwinyi. Fortunately, you Tanzanians have this very beautiful behavior, whereby you respect your older persons highly. You want to be close to the elderly, so that new leaders can learn from their experience and wisdom, as it is here today.

Vaccines can protect the elderly and the health workers who take care of us if we get sick. I have no doubt that Tanzania has the will and ability to protect all citizens. Thereby you will protect people in all countries of Africa, and in the world, too. No one is safe until everyone is safe.

Thank you so much for listening to me!

And congratulations to you, Mzee Mwinyi! 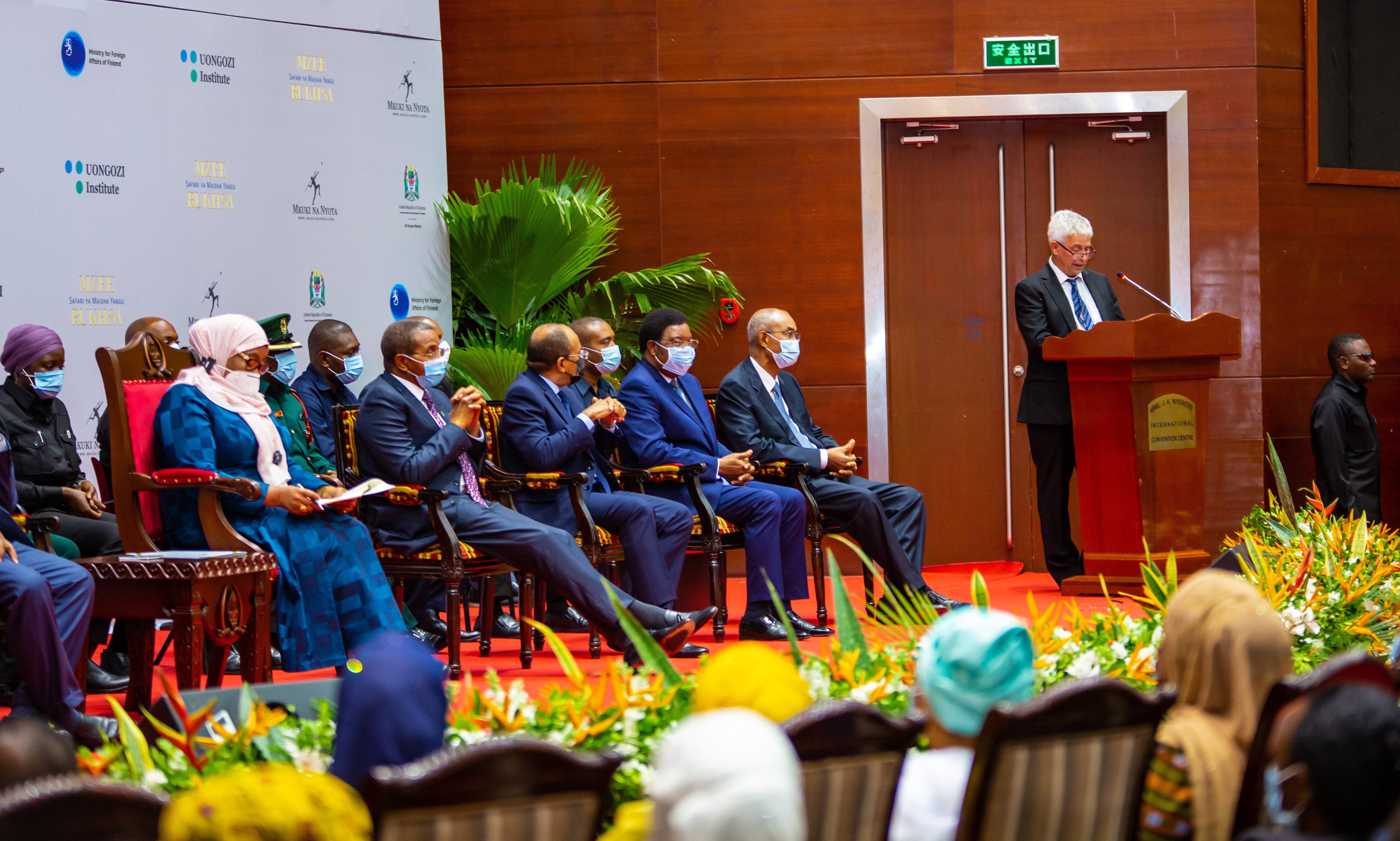 Embassy's Timo Voipio spoke to the audience, including the president of Tanzania Samia Suluhu Hassan (sitting on the stage on the left).  Photo: UONGOZI institute