In the mid-1990s, after the cold war, Tanzania shifted to a multi-party and market economy system as the last Southern and Eastern African country. An important historical event was the multi-party elections of 1995 in which also other representatives than the ones in the ruling party were elected to the parliaments of the United Republic and Zanzibar. Likewise, in the presidential elections there were candidates from multiple parties.

However, the candidates from the ruling parties were elected: Benjamin Mkapa became the President of the United Republic with a clear majority of votes and Salmin Amour was elected to be the President of Zanzibar with a very narrow majority, only a few thousand votes. The Zanzibar Electoral Commission confirmed the result before the recount of the votes, carried out together with election observers, was finalized. Finns had a key role in observing the elections in Zanzibar, both through the UN and the embassy.

The lack of trust created by the suspected electoral fraud in Zanzibar affected many donor relations and projects with Zanzibar. However, donor co-operation with President Mkapa proceeded quite well and the first 5-year term of President Mkapa was a period of many reforms. Tanzania was for example able to negotiate an important and advantageous debt adjustment agreement. The Tanzania Revenue Authority was reformed; officials received a satisfactory salary and corruption was brought under control. In the following years, state tax revenues increased significantly.

“Sauna diplomacy”, practiced already before Mkapa’s presidency, continued. The President was a regular guest in the sauna of our official residence. A sauna was also built to the State House, with the expertise of Finns (Onnela and Tapani Manner) and the donation of a sauna stove from the Finnish business community.

At the beginning of my term, we managed to negotiate with the Tanzanian authorities the implementation of the joint Finnish-Swedish chancellery building according to our original plan, although the ministry responsible of planning strictly required the construction of a six-story building on the previously acquired building site. On the 17th of May 1997, President Ahtisaari, who served as Finland's first ambassador to Tanzania in the early 1970s, inaugurated the new chancellery building together with the representative of Sweden.

A pool was successfully built to the ambassador’s residence after decades of planning. The renovated sauna and the swimming pool were inaugurated on the 17th of May 1997 by Presidents Ahtisaari and Mkapa by swimming and taking a sauna. The footsteps of both presidents and the ambassador, as well as Tapani Manner, the host of Onnela, who was responsible for building the sauna and swimming pool, were cast in the fresh concrete steps of the sauna.

In turn, the presidential spouses Eeva and Anna planted a tree together to the garden of the official residence. The Minister for Foreign affairs of Finland at the time, Tarja Halonen, accompanied the presidential couple on their state visit. Halonen was elected as the first female president of Finland after the presidency of Ahtisaari in 2000. 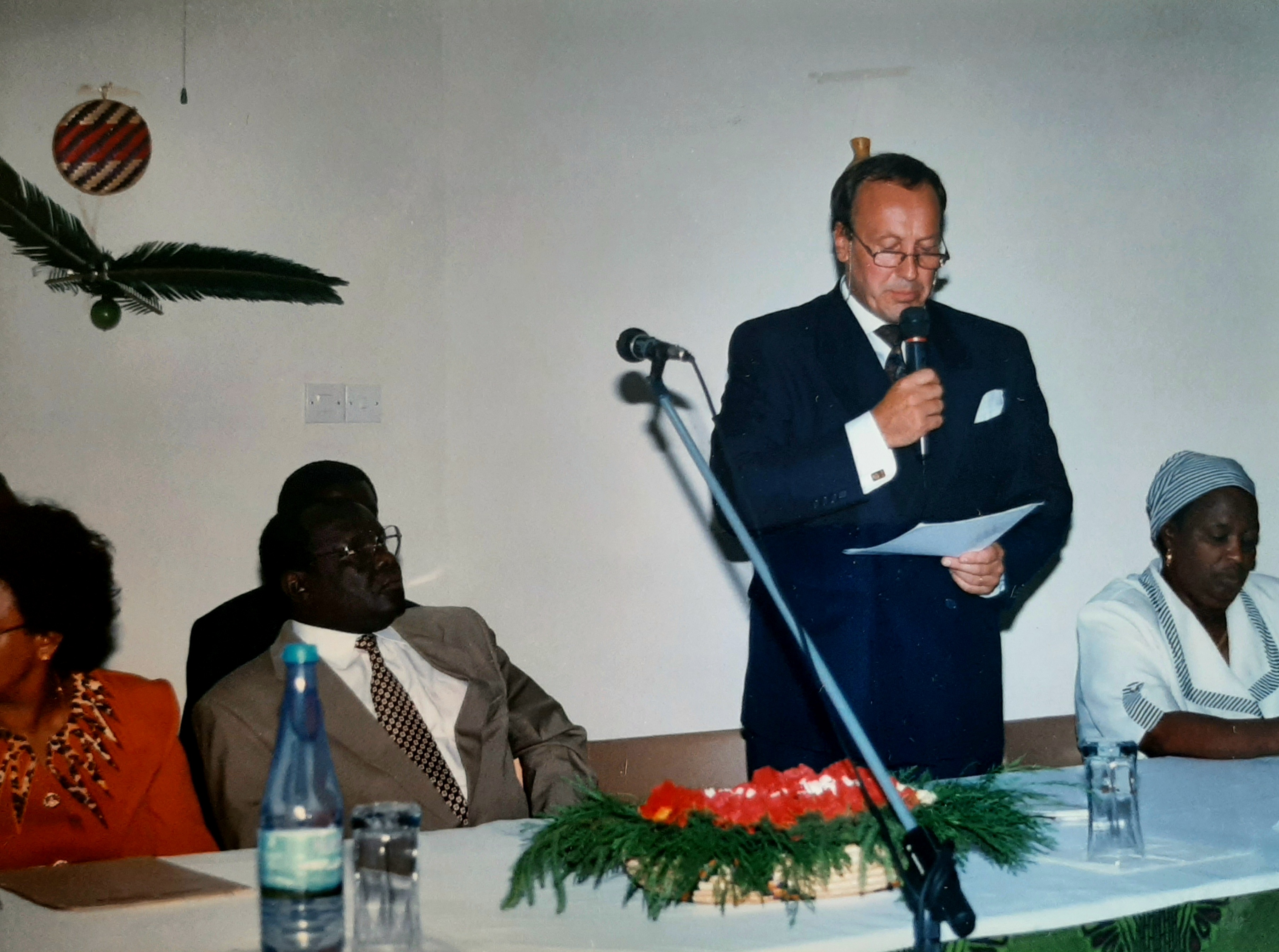 Towards the end of my term in August 1998 Dar es Salaam (In English, a haven of peace or a place of peace) underwent a terrorist attack aimed at blowing up the Embassy of the United States. The U.S. embassy did not suffer from visible damage apart from shattered windows and some cracks, nor did its staff suffer from serious injury. However, the facilities of guards of the embassy were destroyed and the street in front flew into the four winds. In addition to the guards of the embassy, people on the street were killed.

The stones and other fragments from the explosion also flew to the street in front of Finland's official residence and other residences along the street, luckily without personal injuries. A more serious attack was carried out simultaneously in Nairobi, Kenya. The terrorist attacks continued and a completely new era began three years later when the devastating 9/11 attack took place in New York.

Despite the dramatic turns of the last phase, my whole term was marked by an optimistic vibe as well as many reforms that improved the diversification of the Tanzanian economy and the trust of donors. The President also lead the attempts to curb corruption – one of the concrete achievements was the reform of the tax administration mentioned above.

Relations between Finland and Tanzania continued to strengthen as a result of state visits and diversification of development co-operation. Cooperation with the Tanzanian authorities was effective at all levels. Also the cooperation between NGOs and companies, as well as projects with Tanzanian partners, developed and the Tanzanian ownership strengthened. 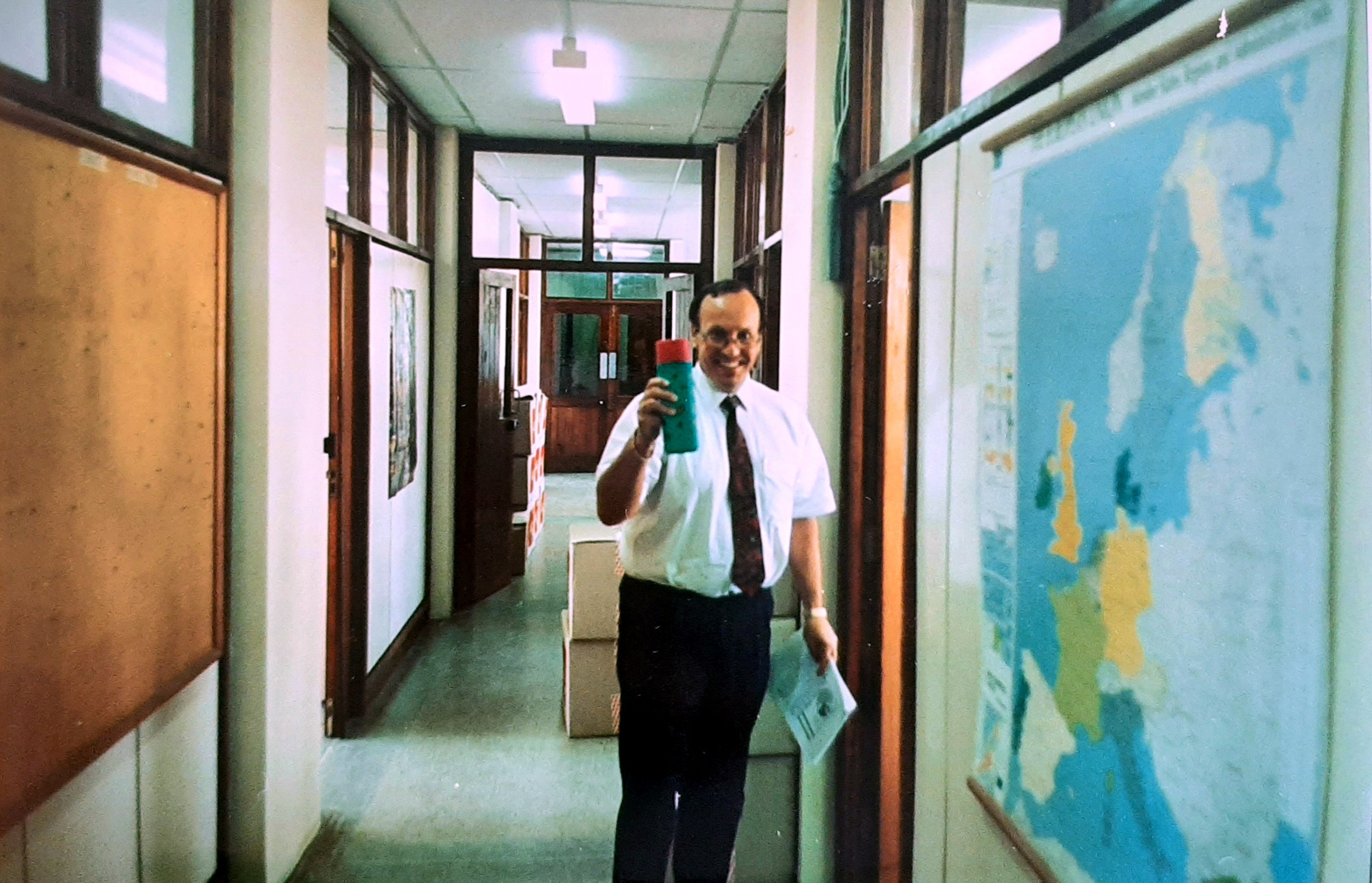 During Ilari Rantakari's ambassadorial term the Embassy of Finland in Dar es Salaam moved to another building. In the picture Rantakari is in the old office building. Photo: Embassy's archive.