Finland supports Unesco's work in the fields of education and communication 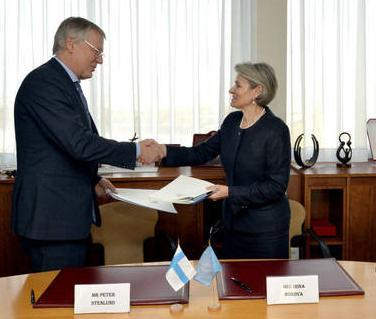 During the signature the Director-General Irina Bokova expressed appreciation to Finland for its longstanding support to core activities of the Organization, noting the country’s international renown for the quality of its education system and its support to advancing education globally. She also recalled Finland’s important hosting of World Press Freedom Day in Helsinki in May 2016.

The Global Education Monitoring Report has an essential role in monitoring progress towards the education targets in the new Sustainable Development Goals (SDGs) framework. The new GEM Report launched in September 2016 shows the potential for education to propel progress towards all global goals outlined in the new 2030 Agenda for Sustainable Development.

UNESCO's International Programme for the Development of Communication, IPDC, is designed to promote media development in developing countries. The Programme provides support for media projects and seeks to secure a healthy environment for the growth of free and pluralistic media.

In addition to the agreements signed during the meeting, Finland has contributed support to UNESCO for several years including to projects for youth affected by the Syria crisis, to the Enhancement of Literacy in Afghanistan programme and to support freedom of expression in the Arab States. Finland is also an important contributor to UNESCO's flagship programme on education CapEFA/ED and supports UNESCO's work in the field of World Natural and Cultural Heritage.

Finland considers that UNESCO has an essential role to play in the implementation of the global goals of the new 2030 Agenda for Sustainable Development. Finland is a candidate for the Executive Board of UNESCO for 2017-2021.

Finland for the Executive Board of UNESCO