In 2018, Finland launched the HÄN campaign, which is based on the gender-neutral personal pronoun “hän” in the Finnish language. The pronoun is a symbol of Finnish equality which is why the Embassy thought it was a great idea to have HÄN as part of this equality-themed event.  With HÄN Honours, Finland wants to also express gratitude for contributions to equality.  As HÄN Honours had not yet been awarded in The Netherlands, the Embassy wanted also to link this to the seminar.

The intention was to organize the seminar in The Hague in March, on World Happiness Day, and to invite panelists from both Finland and The Netherlands. Arrangements had already come a long way when the corona crisis hit and the world came to a standstill. The date of the seminar was postponed to autumn 2020. Since the corona situation did not get better, it was decided to change the seminar into a webinar.

The Embassy organized the “Eurovision Song Contest’s Influence on Equal Rights and Gender Image? Finnish and Dutch experiences ” webinar on 11 November 2020, which was was halfway from the old cancelled and the new upcoming Eurovision Song Contest.  The program included a panel discussion, the presentation of HÄN Honours and a musical greeting from Finland.

Ambassador Päivi Kaukoranta opened the webinar by telling shortly about the purpose of the webinar and Finland's views. He raised e.g. important equality themes to Finland, the results of the latest Gender Equality Index and Finland's candidacy for the Human Rights Council. 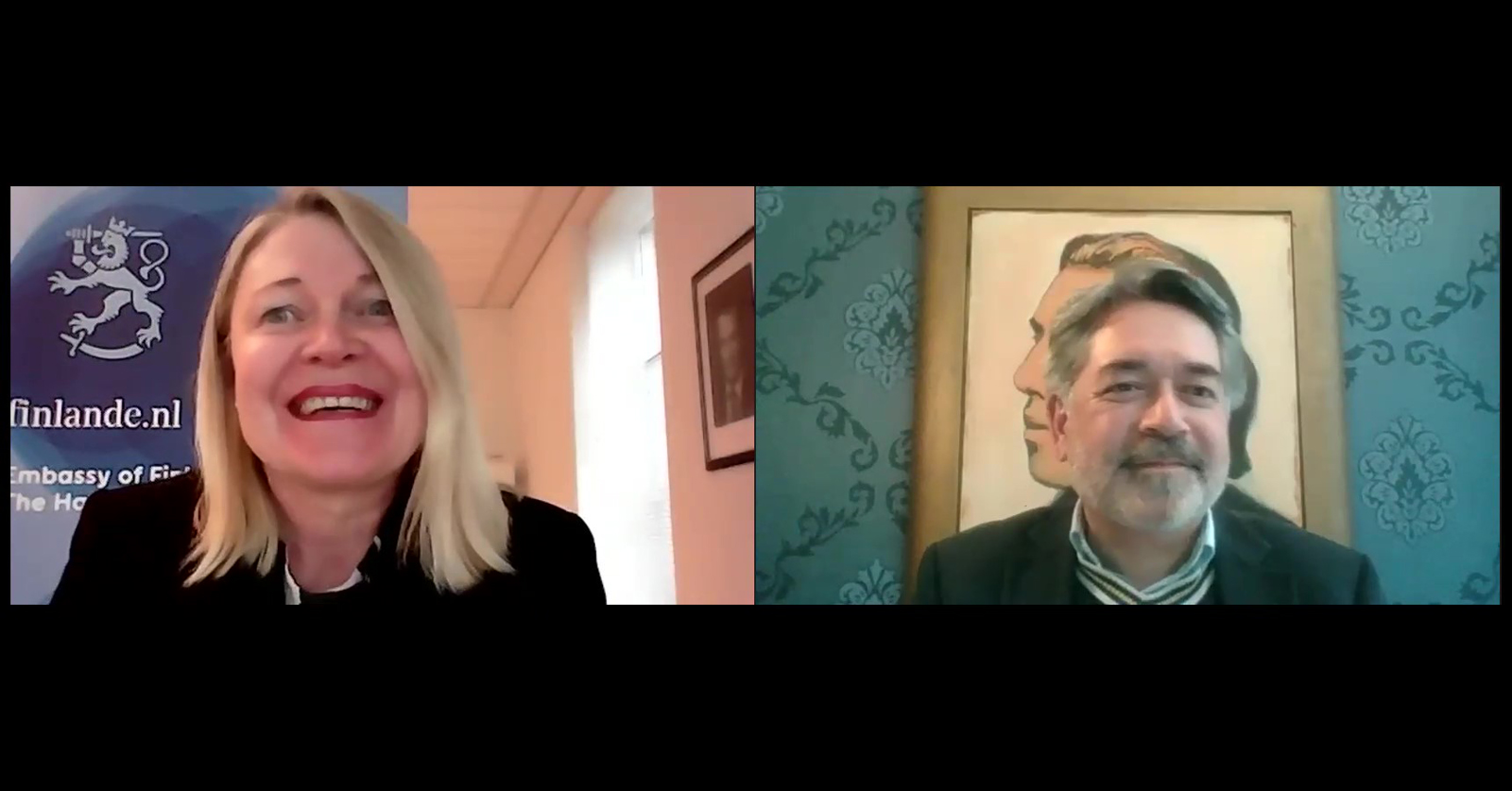 Andrew van Esch, Director of the Global Talent Pool Foundation and The Hague International Network, who moderated the panel, introduced the panelists and immediately engaged the audience by asking a few opinion questions on the equality and activism debate that Eurovision brought with it. The same questions were asked after the panel discussion and it was noted that there was not so much change in the answers. The audience held on to the own views despite the lively debate.

Linda Duits, a media researcher specializing in popular culture, highlighted “homonationalism”. According to her, The Netherlands tends to appear everywhere as an open, tolerant country where women's and LGBTI rights are part of national identity. She noted that the respect for these rights is used as a tool to exclude immigrants from this identity. Eurovision Song Contest is considered in The Netherlands as part of gay culture, which is emphasized e.g. with the selecting commentators and by showing the parties at gay venues. 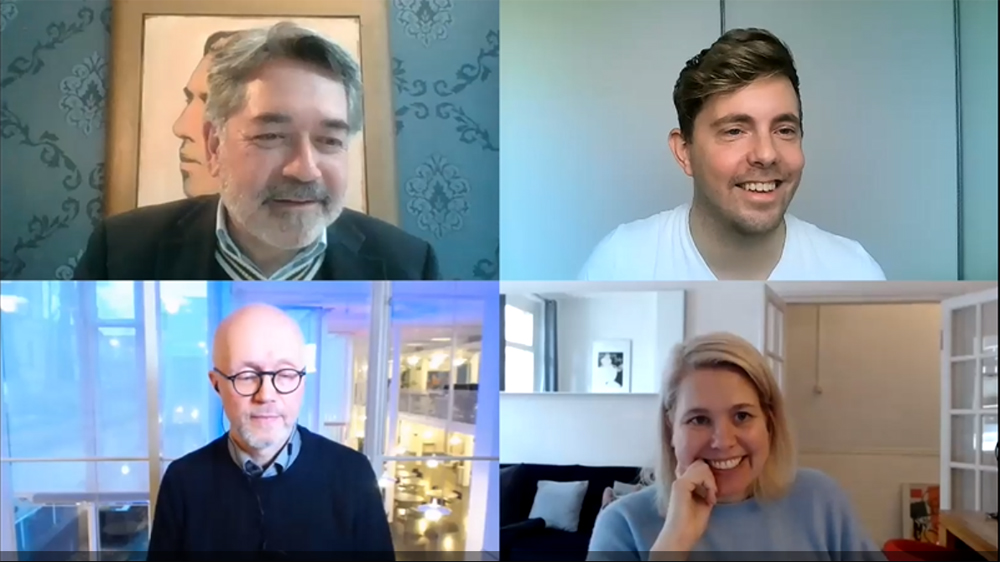 The panelists answered eagerly both the moderator’s questions and those asked by the audience. One of the questions was, why does Eurovision Song Contest have so many fans in the LGBTI community. According to the panelists, the contest is a spectacle that they believe attracts especially those belonging to sexual minorities. The panelists talked about a “gay dream” and an event that means the same for the LGBTI community as the World Cup, and where you can shine with dresses. When asked about the use of Eurovision Song Contest as an instrument of Equal Rights and gender image, it was stated that more activism should be used in Rotterdam, even taking risks to get the message clear. The issue of language at the Eurovision Song Contest was also raised. Jan Wickman stated that Finland and Estonia are probably the only countries where all countries' performances are subtitled in their own language, so that everyone knows what the songs are about. In many countries, the listeners don’t understand the message of foreign songs sung in a foreign language. 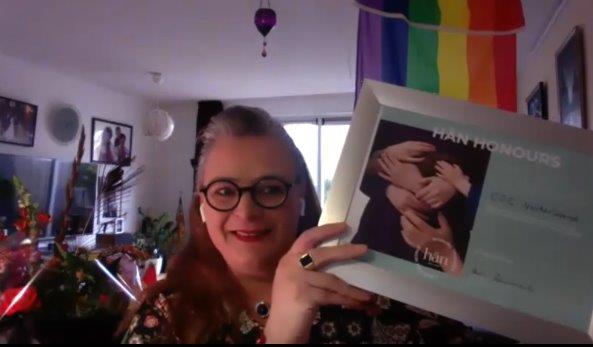 Director of the COC Astrid Oosenbrug and HÄN Honours

After the panel, the program went on to the HÄN campaign through a powerful video, after which the Ambassador virtually handed over the HÄN HONOURS to the world’s oldest LGBTI organization, the COC, which has defended the rights of sexual minorities since 1946. The Honours was received by Astrid Oosenbrug, Director of the COC. Ambassador Kaukoranta presented the many reasons for the handing of the recognition to the COC, e.g. that the COC seeks to decriminalize sexual orientation and gender identity and works for the equal rights, emancipation and social acceptance of LGBTI people in the Netherlands and around the world. In her thankyou speech Oosenbrug said that the COC is working with a diverse group of people to make the world a better place, to ensure that young people grow up in a world where they can be themselves, without prejudice, with equal opportunities. She added that receival of the HÄN HONOURS is very touching.

At the end of the event, the audience received a video greeting and the COC also congratulations from Finland's own Eurovision star, singer-songwriter, Saara Aalto, who told her own Eurovision Song Contest story and performed her Eurovision song “Monsters”. Saara Aalto represented Finland in the 2018 Eurovision Contest, which had been a longtime-dream. 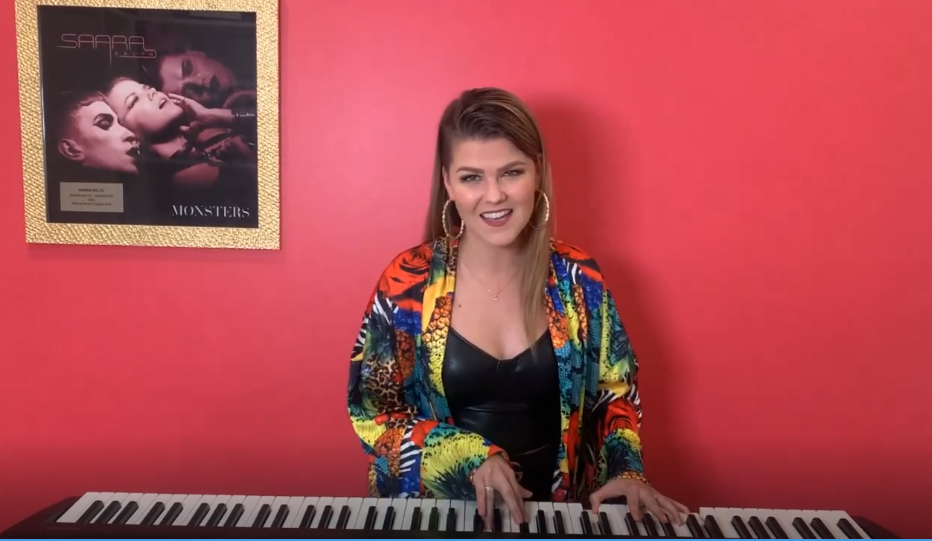 The webinar was followed by more than 30 people, e.g. local Dutch and Finnish organizations, universities and Embassies. The recording of the webinar was available for one week via the Embassy’s Facebook page.