Finnish dogs, and Finland’s competence in training dogs, made headlines around the world with the spread of coronavirus and thanks to Finnish-trained “corona dogs”. However, the corona dogs are not the only ones serving our country with merit; dogs also work in many other sectors and they are, for example, an essential part of the activities of Finnish border guards.

The Deputy Head of Mission of Embassy of Finland in Athens, Katja Karppinen, had the pleasure of visiting Alexandroupoli in Northern Greece, to learn about the work of the Finnish border guards in cooperation with EU Member States. In celebration of the International Animal Day 4.10. we want to tell you a story about the border guard dog Jyrä. 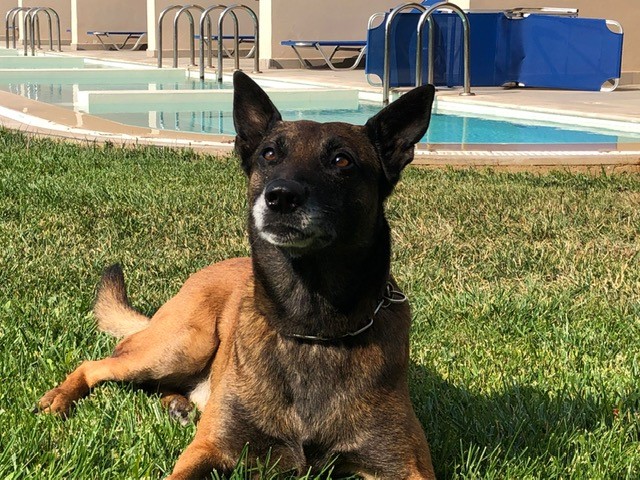 Jyrä and his team (Jyrä’s handler and two other border guard specialist) convinced with their skills, expertise and experiences. Jyrä has already been on a number of foreign missions, and this is not the first time in Greece either. In other words, Jyrä is an old stager. He is a seven-year old Belgian shepherd  maliois-male, whose active training continued until he was about two-three years of age. At this stage, it was felt that Jyrä is ready for real action. In practice, however, the training will continue throughout the career. This ongoing training also requires special skills and patience from his handler, as well as solid experience in training dogs.

Through long-standing cooperation, Finnish border guards have and an excellent relationship with various Greek authorities. However, the real added value they bring, is that team includes hairy professionals, such as Jyrä, which raises Finland’s profile and desirability for these demanding operations. Other countries, of course, occasionally have dogs as well, but in case of Finland, the fact that a dog belongs to a team is more a rule than an exception.

Jyrä is an integral part of his team; he must understand who belongs to his “own gang” and, if necessary, be able to listen to other members of the team. However, Jyrä does not work either if his handler is not working – the master is the master and the leader of the pack from Jyrä's point of view, even though other team members are part of the pack of course. The team also sees Jyrä as “one of the guys”.

In his handlers’s controlled guidance, Jyrä cheerfully comes to get acquainted. After greetings and sniffing to beging with, it soon becomes clear though, that he is a working professional with his own demands, status and roles – if he does not like something, he clearly express his views. Today, Jyrä has no objections and we continue to talk with his human team members about dogs in the Border Guard.

We discuss, for example, the recruitment of dogs. It turns out that very few  most suitable individuals will be selected for this demanding work. Dogs with potential behavioral issues are not suitable, although a dog must also have plenty of courage and strength, not forgetting good and obedient behavior. Jyrä is ( in the words of his handler and only half seriously) kind of a tool, but at the same time, Jyrä is a dog, who is playing, chilling, going for walks and enjoying life! This is why both the dog and the handler need to have a good game eye and an excellent ability to interpret each other's behavior to be able to work smoothly together.

Jyrä is also a family member of his handler. When Jyrä retires at around the age of 10, he will stay with his family, as will many of his other hairy colleagues (and he will probably visits his human team sometimes, as well!).  Jyrä is a great example of our Finnish expertise and strengths in many different areas – without ignoring the human expertise! 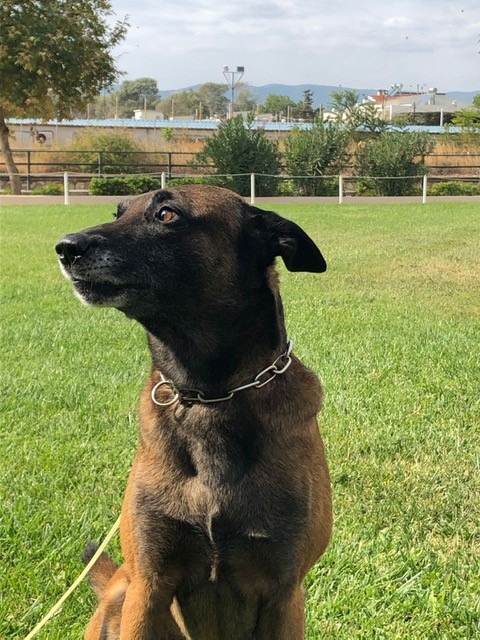 A few words about Jyrä’s team in Greece

When I met the Finnish border guards, I received a comprehensive briefing of the Greek border situation and migration, which have been an issues much talked about in other parts of Europe as well. Some border operations are well-planned in advance; some of them are taken up on short notice, on demand and as necessary. Each of the team member on this mission, like Jyrä, have been involved in Greece’s border operations before. They are also open and eager to participate in the future. It was my pleasure to hear and learn how actively and professionally Finland is implementing its international obligations and how great the cooperation with Greece is in particular. I also got a more in-depth picture of where and how Finland border guards work, in various field, areas and tasks. And, in many of these, the hairy professionals are involved as well.

I would say hats off for our border guards! Even in places under high pressure, they operate professionally, sharing Finnish know-how and lessons learned. At the same time, they bring their own experiences and lessons learned from around the world back to Finland to widen our horizons. I truly want to thank Jyrä and the whole team for their work: you are doing a great and meaningful work here and elsewhere, even if it is not always visible to the wider audience.

The Embassy wishes Jyrä and all hairy friends and coworkers around the world a great International Animal Day on 4.10.2021!