On 24-25 March 2014, the Government agreed on the central government spending limits and the general government fiscal plan for 2015-2018. The objective of the fiscal and economic policy of Prime Minister Jyrki Katainen's Government is to strengthen the financial foundation of the welfare society and conditions for growth to ensure that public finances are on a sustainable basis.

The state of the Finnish economy has consistently proved to be weaker than expected and assessments of the medium-term outlook have deteriorated. Underlying the weak economic growth have been the problems of the global economy and the euro area, the restructuring of Finnish industry and weak competitiveness. As economic growth and employment have remained weaker than expected, achieving the targets set by the Government for central government finances has proved to be difficult. According to preliminary data, Finland's GDP fell last year by 1.4%. This was the second successive decline in GDP.

The improvement of the international economy will also lead in time to a recovery in the domestic economy. In 2014 Finland's GDP is projected to return to a path of slight growth, driven by exports. There are downside risks facing the Finnish economy, however. Growth in world trade is fragile and, particularly in the euro area, there are no guarantees of the beginning of sustainable growth. If the crisis in Ukraine is prolonged, its impact will also weaken Finland's growth outlook. The growth prospects for private consumption is modest, due to the weak development of real purchasing power, the subdued future outlook, and the labour market situation.

To curb central government indebtedness in a credible manner and within a realistic time frame, the Government decided in its negotiations on new measures, which will reduce central government expenditure and increase revenue by EUR 2.3 billion at 2018 prices.

During its term, the Government has adopted a range of measures with immediate impact to reduce central government expenditure and increase revenue, which will have a net impact at 2017 prices of around EUR 6.6 billion, i.e. 3% of GDP, compared with the last spending limits decision of the previous parliamentary term.

On the taxation side, the adjustment measures consist mainly of increases in excise duties as well as measures increasing fairness in the taxation of earned and capital income.

In 2015 earned income taxation will be increased by not making adjustments for earnings level and inflation. This will increase tax revenue for around EUR 155 million. Taxation of low incomes, however, will be eased by EUR 100 million by raising the basic and earned income deductions. The limit of the highest income class of the progressive income tax scale will be lowered to EUR 90,000 and this will remain in effect until 2018. The measures will reduce income differences.

The changes made to capital income taxation will increase tax revenue by EUR 28 million while at the same time reducing income differences. Taxation of capital income will be increased such that the income limit of the higher tax rate will be lowered to EUR 30,000 and the higher rate increased to 33%.

Inheritance and gift taxation will be increased by raising all marginal rates in tax scales by one percentage point. In addition, the tax class of gifts and inheritances over EUR 1,000,000, which was previously prescribed as temporary, will be made permanent from 2016.

The annual motor vehicle tax on cars and vans will be increased by EUR 150 million such that the higher tax will be levied from the beginning of 2016.

Tax subsidies will also be cut in order to increase tax revenue. Energy tax subsidies for mining activity will be abolished, and the previously tax-free liquefied petroleum gas will be made taxable. The car tax reduction on taxis (excluding specially equipped taxis) and on cars imported as removal goods will be abolished.

In addition, fees levied by the central government will be adjusted and social and health care customer fees increased.

The Government-agreed expenditure savings are broadly directed at the administrative branches of different ministries. Savings decisions are directed, among other things, at development cooperation, to which an annual saving, rising from around EUR 50 million to around EUR 100 million annually, is allocated. In accordance with previous commitments, Finland will maintain the objective of increasing development cooperation appropriations over the long term to 0.7% of GDP.

A saving will be directed at child allowances, thereby reducing central government expenditure by EUR 110 million. In addition, discretionary government transfers allocated for improving the quality of basic education will be reduced by EUR 57 million. The central government will no longer participate in the financing of projects establishing educational institutions. The saving to central government finances will rise from around EUR 12 million in 2015 to EUR 22 million at the end of the spending limits period.

Provisions relating to earnings-related unemployment security will be amended, such that central government expenditure falls by EUR 50 million at 2015 prices. The amendments will be prepared in cooperation with social partners with the goal of directing the saving at those receiving the highest unemployment benefits. Labour policy funding will be reduced by EUR 50 million.

In addition, central government wage drift will be limited to the average level of the general labour market and, as part of the Structural Policy Programme, an annual saving in appropriations corresponding to 0.5% growth in productivity will be directed at central government operating expenditure.

Properties belonging to Senate Properties and Metsähallitus will be sold. Balance sheet management of the central government's company ownerships will be enhanced by expanding the ownership base of state-owned unlisted companies and, if necessary, withdrawal from company ownership. In addition, sales of shares of state-owned listed companies as well as other measures will be implemented to increase revenue transferred to central government. The total amount of dividends of unlisted companies will be increased. With respect to the State Pension Fund, a legislative amendment will be prepared, on the basis of which revenue recognition from the Fund will be increased. In addition, a recognition of revenue will be made from the State Guarantee Fund. The additional recognition of revenue arising from the measures compared with that outlined earlier will be around EUR 1.9 billion in 2014-2015.

Most of the additional recognition of revenue will be directed to the repayment of central government debt.

As part of a re-allocation of central government assets, the Government also decided on significant investments in growth for 2014 and 2015, totalling around EUR 300 million in both years. The main investments relate to investments in excellence and innovation creating new, future growth as well as in transport projects that create jobs quickly.

A total of EUR 50 million will be allocated in 2014 and 2015 to venture capital investments in industrial growth-stage companies (Finnish Industry Investment).

An authorisation increase of EUR 20 million will be made for industrial growth-stage R&D&I activity.

The central government is prepared to increase the capital of universities by an amount equal to three times the private capital raised by universities up to a maximum of EUR 75 million in 2014 and 2015 (EUR 150 million).

Funding of EUR 40 million will be granted for the renovation of the Olympic Stadium in 2014 and 2015.

EUR 10 million will be allocated in both 2014 and 2015 to strengthen the competence base of adults.

In the spending limits period, EUR 30 million will be allocated to media innovation support.

In 2014-15, a total of EUR 10 million will be allocated to Metsähallitus nature services to improve the infrastructure of national parks and for investments in nature and cultural sites. These include the investments in the island of Öro and in the new Teijo and Etelä-Konnevesi National Parks. In addition, the Government decided in the same context to strengthen protection of forests in Southern Finland by allocating 13,000 hectares of central government land to the protection of the METSO programme.

National Housing Fund grants to special groups will be increased by EUR 20 million. The interest contribution payable on youth and student housing will be reduced from 3.4% to 1% up to the end of 2015.

New production of housing in the Helsinki Metropolitan Area will be supported by introducing fixed-term start-up assistance in relation to a 20-year loan guarantee model until the end of 2015 and by implementing a 20-year interest-rate subsidy model from the beginning of 2015.

The Government will initiate implementation of the City Rail Loop (Pisararata) and preparation of the related funding model as well as negotiations on funding contributions.

Malmi Airport will be assigned to residential use. Central government operations in the area of the airport will be discontinued as quickly as possible, at the latest by 2020.

The central government spending limits include those Government Structural Policy Programme measures that have cost impacts and whose preparation is at this stage sufficiently advanced.

Other highlights from the administrative branches

In accordance with a resolution on the comprehensive reform of central government research institutes and research funding, a number of organisational reforms will be implemented during the spending limits period by merging research institutes into larger entities. In accordance with the resolution, funding of various research institutes' research appropriations has been brought into the administrative branch of the Prime Minister's Office to strengthen analysis, assessment and research activity that supports social decision-making. Through the establishment of a funding instrument for strategic research, the Academy of Finland can make its first funding decisions in 2015. Around EUR 64 million is available for granting to strategic research project funding in 2015.

In the spending limits period, the Government is allocating funding for the arrangement of events in 2017 marking the centenary of Finland's independence.

The Tax Administration will be allocated an additional EUR 2 million per year to combat the shadow economy. Additional funding will be allocated to Customs' operating expenditure to enhance customs inspections on the Eastern border and to combat illegal passenger imports of alcoholic beverages.

The Forestry Development Centre Tapio will be incorporated as a state-owned company from the beginning of 2015.

A total of EUR 0.7 million in additional funding will be allocated to reduce damp and mould problems.

The level of central government on-budget expenditure in 2015 will be around EUR 53.5 billion euros. Expenditure is expected to rise during the spending limits period nominally by an average annual rate of just under one per cent. In real terms, expenditure will fall on average by an estimated 0.5% per year.

Taking into account the development of appropriations in line with the spending limits as well as revenue estimates, central government on-budget finances are expected to be around EUR 2.7 billion in deficit in 2018.

The decided adjustments are expected to be sufficient to moderate the central government debt-to-GDP ratio during the spending limits period. 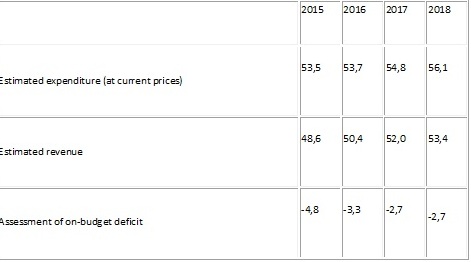 Appendix: Government decision on implementing the Structural Policy Programme as part of the General Government Fiscal Plan (in Finnish):