Team Finland is ready to roll 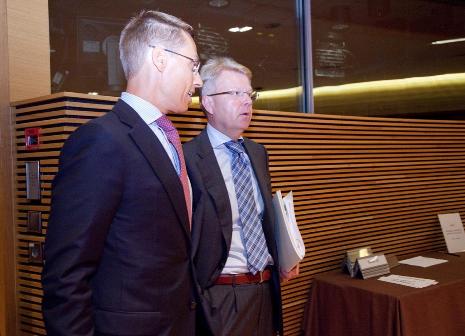 Ministers Stubb and Häkämies gave an introduction to Team Finland for the Heads of Mission at their annual Meeting.

”There's a new kind of buzz in Team Finland,” said Minister for European Affairs and Foreign Trade Alexander Stubb when speaking about new trends in Finnish exports promotion at the Foreign Ministry's Annual Meeting of Finnish Heads of Mission on 21 August. Co-speaker with Minister Stubb, Minister of Economic Affairs Jyri Häkämies agreed: ”Team Finland is an excellent initiative, designed to facilitate things for enterprises while promoting opportunities for growth and internationalisation”.

The Team Finland concept refers to a new, networked way of organising export promotion and internationalisation services for companies. Close collaboration between different service providers will used for making the services more customer-oriented. The Team Finland operating model is based on the action plan on economic external relations, adopted by the government in the spring, which supports employment and internationalisation of small and medium-sized enterprises, in particular. ”Our goal is to provide seamless services, so that the users would be unaware of dealing with different organisations,” Minister Häkämies said.

The importance of shared goals was also mentioned by Minister Stubb, who stressed the radical changes in the world and global markets: economics and politics are becoming closer to one another. Moreover, enterprises operate differently today because of global value chains, among other factors. The old Finnish export promotions model was too siloed; there was a lack of shared goals and the system's ability to react to changes proactively was weak. According to Stubb, operating models resembling Team Finland have already been implemented successfully in Shanghai and Madrid, to name a few.

What difference will Team Finland make compared with the previous model? Strategic guidance of the operating model is a new feature. Team Finland has an appointed steering group chaired by Prime Minister Jyrki Katainen. Customer-orientation will have a central role in all operations. At the Meeting, Minister Stubb asked the diplomats representing Finland in different parts of the world to ask themselves the following question every morning: ”What can I do for Finnish enterprises today?” – naturally in cooperation with other links in the Team Finland network. As Minister Häkämies pointed out to the audience, the role of Embassies is a very pivotal one in the modern world. Their expertise is needed, for example, in analysing forthcoming changes in the operating environments of Finnish enterprises. Minister Stubb stressed that the entire Government is responsible for securing equal operating environment for Finnish enterprises compared with the competing countries. The Ministers of different political sectors can promote enterprises associated with their respective fields while doing export promotion abroad.

Minister Häkämies added that discussion about internationalisation is not only about export promotion; we also need import promotion. Finland needs investments, and we are in a good position for attracting them: Finland has skilled people and good references, such as Google. Finland has also paid specific attention to tax reliefs on research and development.

Roll-out of the Team Finland operating model will have a kick-start on 10 September at the Finlandia Hall, on SME internationalization day. The speakers in the event include President of the Republic Sauli Niinistö, Prime Minister Jyrki Katainen, Ministers Alexander Stubb and Jyri Häkämies, and representatives of companies that have succeeded internationally. More importantly, the organising parties want to hear the views of SMEs in the workshops, where they can express their needs to the providers of export promotion and internationalisation services. The event is organised by the Foreign Ministry, the Ministry of Employment and the Economy, the Confederation of Finnish Industries, the Central Chamber of Commerce, the Federation of Finnish Enterprises and Finpro.