Commitment to common objectives and shared values is needed from the EU Member States for Europe to achieve more.
Prime Minister Sipilä: EU must look to the future 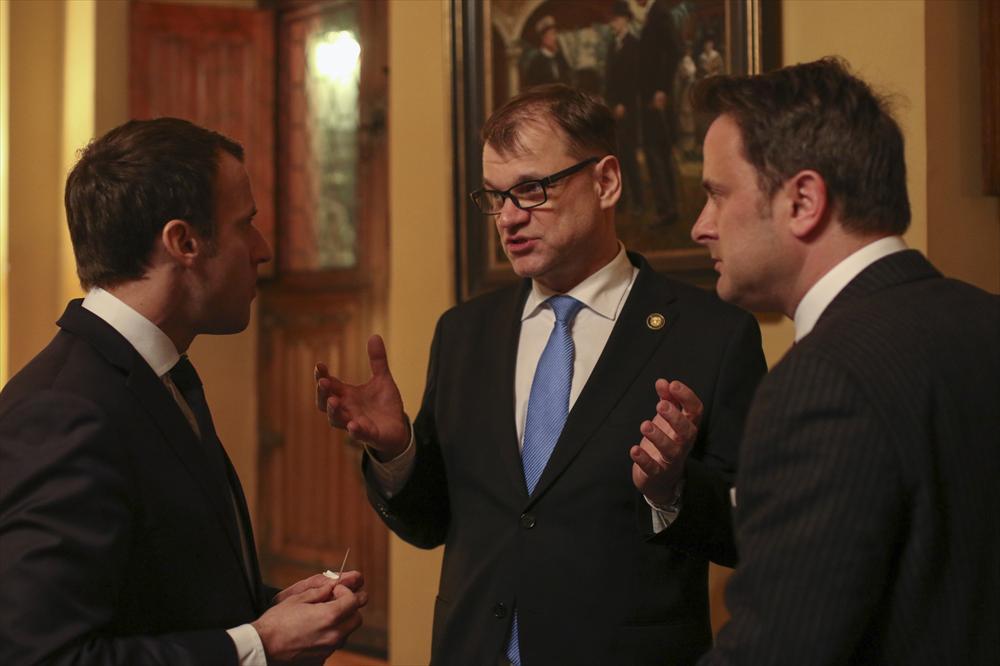 Juha Sipilä speaking with other Heads of States ahead of the European Council meeting.

Finland and the European Union have switched gears from crisis response to strong development. The Finnish experience shows that while changes can be painful, they are worth it. The same applies for Europe. The EU has a seven-year budget. EU leaders will meet this week informally in Brussels to discuss the multiannual financial framework for 2021–2027 and institutional issues.

The efforts to influence these issues are already in full swing. Brexit will complicate matters, as the UK is a net contributor to the EU budget. The UK’s withdrawal from the EU will reduce the annual contributions by around EUR 19 billion, which will leave a gap of approximately EUR 11 billion per year in net terms.

The current EU budget is around EUR 1,000 billion for the seven-year period, or approximately one per cent of the Member States’ gross national income (GNI). Finland is now contributing around EUR 2 billion per year to the EU budget and receiving around EUR 1.5 billion, making Finland a net contributor.

However, an accountant’s approach is the wrong way to develop the EU. Finland draws great benefits from the single market and the EU common trade policy, among others policies. I am convinced that the British will come to miss these benefits.

Finland should focus on two things in the negotiation and influencing process: the overall budget and the formation of the Union’s appropriation policy. The outcome must be drive both Europe and Finland forward. A likely timetable for the final decisions concerning the financial framework is the end of 2019 during the Finnish EU Presidency.

Our point of departure is that the UK’s withdrawal will be taken into account in the overall financial framework level in full. The remaining 27 Member States must make do with a smaller budget in the future. Finland’s position means that the EU budget would be a little over one per cent of GNI. This would also mean a smaller overall budget for the EU. In any case, Finland’s contribution would increase following our economic growth.

The Finnish Government is seeking for Finland a relatively higher proportion of the agricultural and cohesion policy funds, which account for two thirds of the overall EU budget. The EU budget should also better respond to topical needs, such as research and product development, competence, employment and growth.

Funds are also needed for defence cooperation and for migration. The EU needs responsible and economical use of its funds. Finland is not in the group of net contributors holding the toughest line. Our position is that cooperation adds value to the whole of Europe in all the above areas.

A stronger element of conditionality must be introduced into EU funding, taking into account compliance with common rules, burden sharing and the rule of law. All Europeans must commit to common objectives and shared European values for Europe to achieve more.

In institutional terms, Finland considers it only natural that the UK’s withdrawal from the EU will not only decrease the EU budget but also reduce the size of the European Parliament. The European Parliament, however, proposes to redistribute 27 of the UK’s 73 seats to other Member States. It has the right of initiative on this matter. Finland would get one extra seat.

The European Council must first reach a unanimous decision on the proposal to redistribute the Parliament seats, and the European Parliament will then give its final consent. If Finland is granted an extra seat, I will make sure that the Ålands Islands are consulted.

Finland’s position regarding the European Commission is that each Member State should have its own Commissioner. I do not think it would be wise to combine the Commission and Council presidencies. Small Member States have usually benefited from a strong and independent Commission.

The current Commission has taken steps in the right direction and the EU has started to focus on the fundamentals. In this respect, it is easy for Finland to give its full support to the EU institutions. All Europeans will win, Finns included. Better targeting of funds will help us make Europe better.