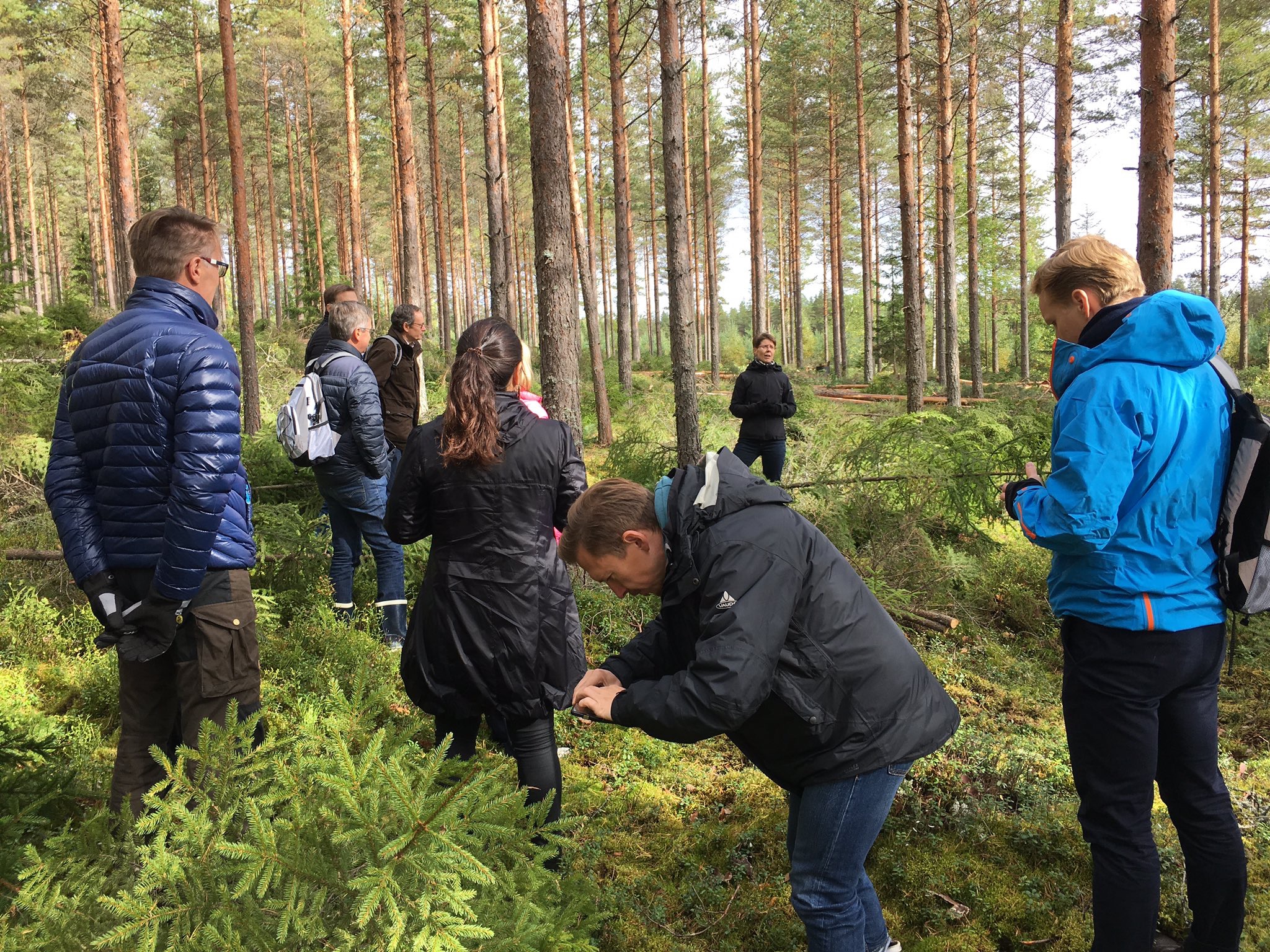 The boots-and-helmets excursion to Finnish wilderness started in a civilized manner: The first morning, minister for Housing, Energy and the Environment, Mr. Kimmo Tiilikainen had breakfast with the visitors at their hotel and explained the particularities of Finland’s climate and energy policy.

– Finland is ambitious when it comes to implementing the Paris Agreement. In its national 2030 Climate and Energy Strategy, Finland sets targets for increasing the share of renewable energy to over 50 percent and transport biofuels to 30 percent. It also aims at halving the use of fossil fuels and phasing out coal by 2030, Minister Tiilikainen explained. 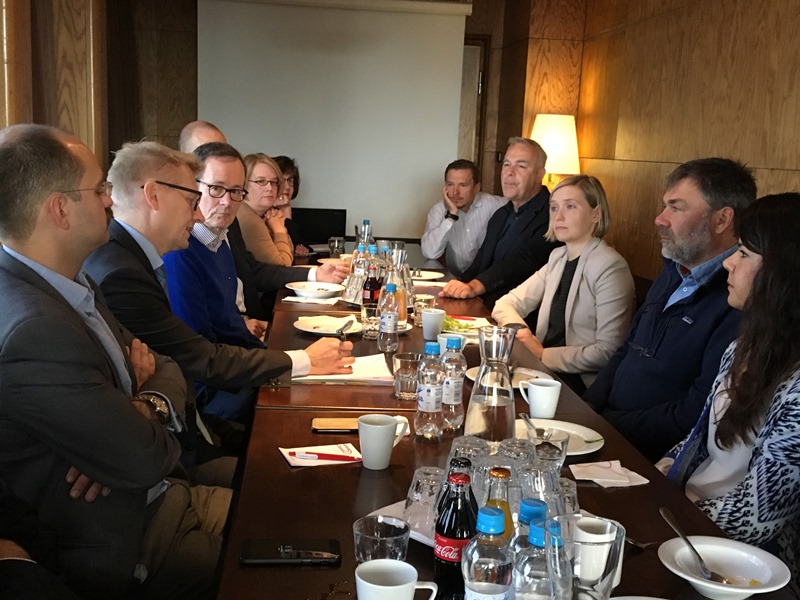 – We aim to increase the use of renewable energy in a sustainable way so that its share will rise to more than 50 percent during the 2020s. Transport sector decarbonisation is vital to achieving the challenging requirements for emission reductions in the non-ETS sector. We have the know-how to maintain our leadership in the area of advanced biofuels, he continued.

– The revised Renewable Energy Directive together with other relevant proposals should create a framework which enables us to achieve these goals in a cost-efficient way, the Minister concluded.

Trees into logs with astonishing precision

Then it was time to leave the city behind. The group jumped in a bus and rode towards the Eastern border through the dark green forest scenery that actually covers 78 percent of all Finland. The first stop took place in the middle of nowhere.

The somewhat stunned visitors where first offered lunch in an active forestry site of UPM, a major Finnish forestry company. After a bowl of warm soup and a presentation on sustainable forestry, there was an opportunity to ride a harvester together with the machinist. 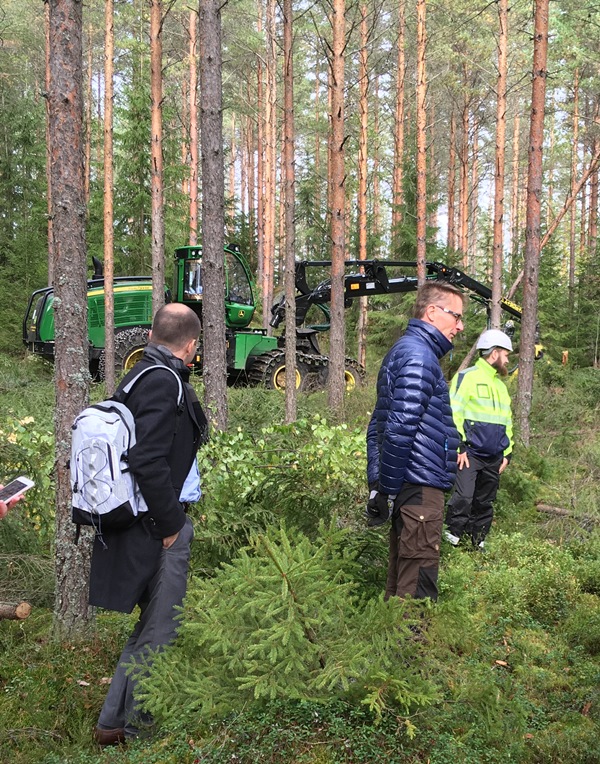 The very precise forest harvester was introduced to the EU visitors.

Not everyone wanted to do this. It did feel a lot safer to observe this heavy forestry vehicle from a distance as it did what it is designed to do: pick a tree in its claws, fall it, delimb it and neatly cut it into logs. The precise work of this highly digitalized piece of machinery left the visitors astonished. It only picked up those trees marked by spacing and left the rest of the forest floor intact.

The next stop for the visitors was an integrated UPM plant Kaukas in Lappeenranta. The plant consists of a pulp mill, a mill producing magazine paper, a sawmill, a state of the art biorefinery producing wood-based diesel and a research centre. The tour of the site was a great showcase of what you can do with wood. And the visit to the sawmill was, as one of the hosts warned beforehand, “very noisy and dusty, but fascinating”.

The UPM Kaukas integrated plant boasts of 120 years of experience in efficient use of resources and harnessing forestry side streams, wastes and residues to turn these renewable materials into pulp, paper, sawn timber, energy and biofuels.

The second day of the excursion consisted of a presentation by Finnish Forest Industries on forest-based bioeconomy over lunch and a visit to the Neste Refinery in Kilpilahti, Porvoo. Neste is the world’s largest producer of renewable diesel and the Kilpilahti site the home of one of Europe’s most modern biofuel refineries.

Modern was also the energy company Fortum’s Järvenpää CHP plant next on the program. The site, where production started only in 2013, looked so clean it was hard to believe that something actually went on there. This CHP plant does, however, use local biofuels (forest residues, sawdust, horse manure and bark) to supply heat for the nearby two cities of Tuusula and Järvenpää as well as electricity. The site is also home to the Nordic countries’ biggest lithium-ion battery storage which is part of Fortum’s research on future solutions.

Way to convey a message

A group of Commission officials as well as MEPs and Parliament officials visited Finland on a two-day excursion during which the focus was on the Nordic member state’s bioeconomy solutions namely in the sectors of forestry and clean energy.

The excursion was the fourth in line of similar excursions organized by the Finnish Permanent Representation and the Ministry of Economic Affairs and Employment, home of energy and bioeconomy matters in Finland.

– We find these trips an effective way to show Finnish reality and convey our thoughts for the future to experts and policymakers working in Brussels, says Ms. Minna Kivimäki, Finnish Coreper I Representative.

– It is also on great opportunity to show off Finnish solutions in the field of clean energy, she proudly adds 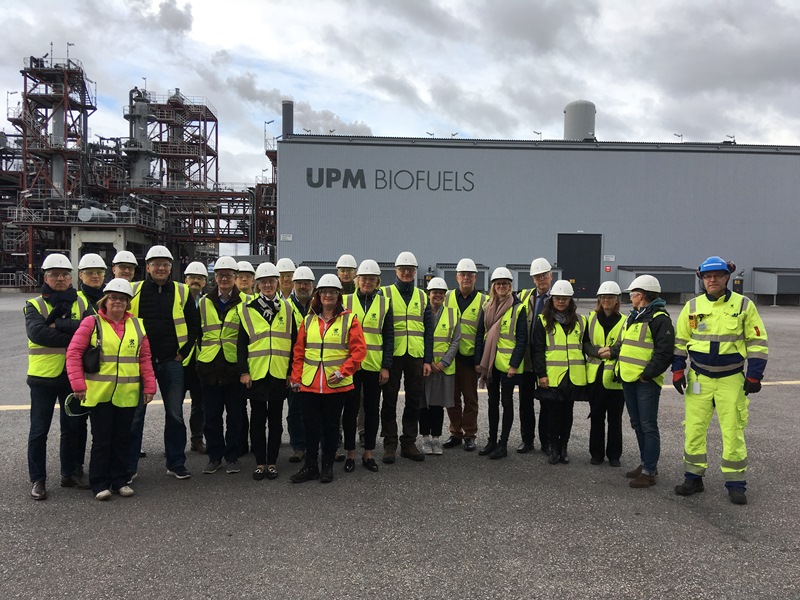 Visiting the state of the art UPM plant Kaukas in Lappeenranta.

In Finland most forests are owned by private owners. Approximately 85 percent of all Finnish forests are certified.

In Finland, 97 percent of wood in forests is pine, spruce and birch. Almost half of the forests are pine forests. Most of Finland's forests are mixed, ie. they grow more than one tree species.

According to Finnish law, roaming and even overnight camping on private land and forests is everyman's right. It is currently the berry and mushrooms picking season, and collecting wild super foods is a national hobby at this time of the year.

Combined heat and power production is the most common means of energy production in Finland. The CHP networks serve people very efficiently through dark and cold winters.

There is a population of deadly Chilean recluse spider at the cellars of the Finnish National Museum. No one really knows how these creatures got there some 50 years ago.

The wooden roof of the Porvoo Cathedral which dates from the 13th century, was severely damaged by fire in 2006. The church reopened in 2008 after reparations.

Jenni Hakala
Ministry of Economic Affairs and Employment of Finland