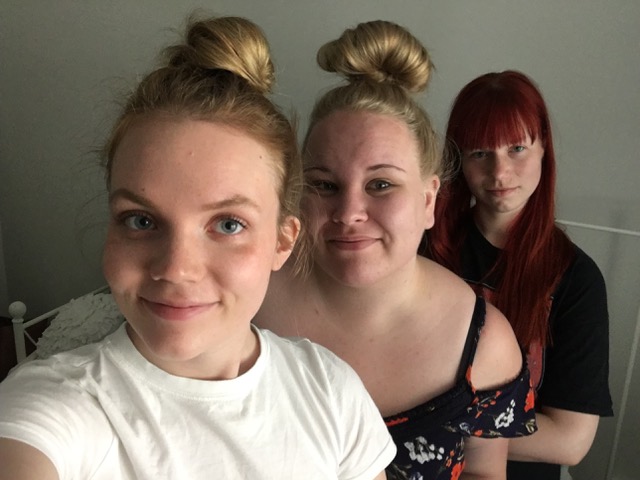 Milena Raappana, Liisa Kallio and Kirsi Lätti want to bring the EU closer to young people by means of humour.

What is the “relationship status” between “rules-loving” Finland and the “bureaucratic” EU? This will be put to test in a chatfiction series in three episodes, planned and carried out by students of Turku University of Applied Sciences. In the series, Finland and other countries land on an island of temptations, where the Finland-EU relationship is tested. The humorous series was created as part of a communications course organised by Turku University of Applied Sciences in cooperation with Europe Information.

Students of communications were divided into teams and assigned to prepare a proposal for a media project. Its purpose was to reflect the importance of the EU in young people's everyday life, focusing on the age group voting for the first time in the forthcoming European Parliament election. The winning project was carried out for release on the social media channels of Europe Information.

"We decided to combine chatfiction with the reality TV theme, because it is something young people are familiar with. We want to bring the EU closer to young people by means of humour, because the Union is so big and young people may find it dull and bureaucratic,” the winners Liisa Kallio, Kirsi Lätti and Milena Raappana say.

"The aim of the series is to illustrate the EU's role in young people's everyday life and to invite them to consider and reflect their relation to it. We hope that having viewed the series, youth would have a bit more concrete and hands-on picture of the EU and it wouldn't appear distant and abstract." Kallio, Lätti and Raappana note.

The students were given the assignment and briefing on EU themes by Europe Information, but were free to choose the topics for their project proposals.

"We wanted to give the students the freedom to discuss EU themes from the perspectives that interest their own age group. We were delighted to receive a host of insightful and creative proposals, presenting bold alternatives to the more traditional ways of communicating about the EU, such as the chatfiction," says Johanna Kaprio, Communications Officer from Europe Information.

Samuel Raunio and Jussi Kokkola, teachers of the course, are satisfied with the cooperation with Europe Information.

"The assignment for the students was challenging but at the same time they had to look beyond conventional solutions. The EU is not necessarily accessible to young people if only the so-called official policy communications line is followed," say Raunio and Kokkola.

The three episodes, one per week, of the series will be shown on Europe Information's Instagram and Youtube accounts.

The project is part of the Let's talk about the EU campaign, launched in 2018 in Finland, which can be found in social media using #munEU.