Members of Finland’s Presidency Team Eeva Helminen and Jaakko Koivusaari worked alongside Lahtinen throughout the period. Helminen, who joined the team two years ago, was in charge of all practical matters related to the Presidency, including the logo, visual identity, meeting arrangements, materials and gifts. Meanwhile, Koivusaari joined the Presidency team last autumn. Implementing Finland’s Presidency was his first real task at the Foreign Ministry and a good start to his diplomatic career. 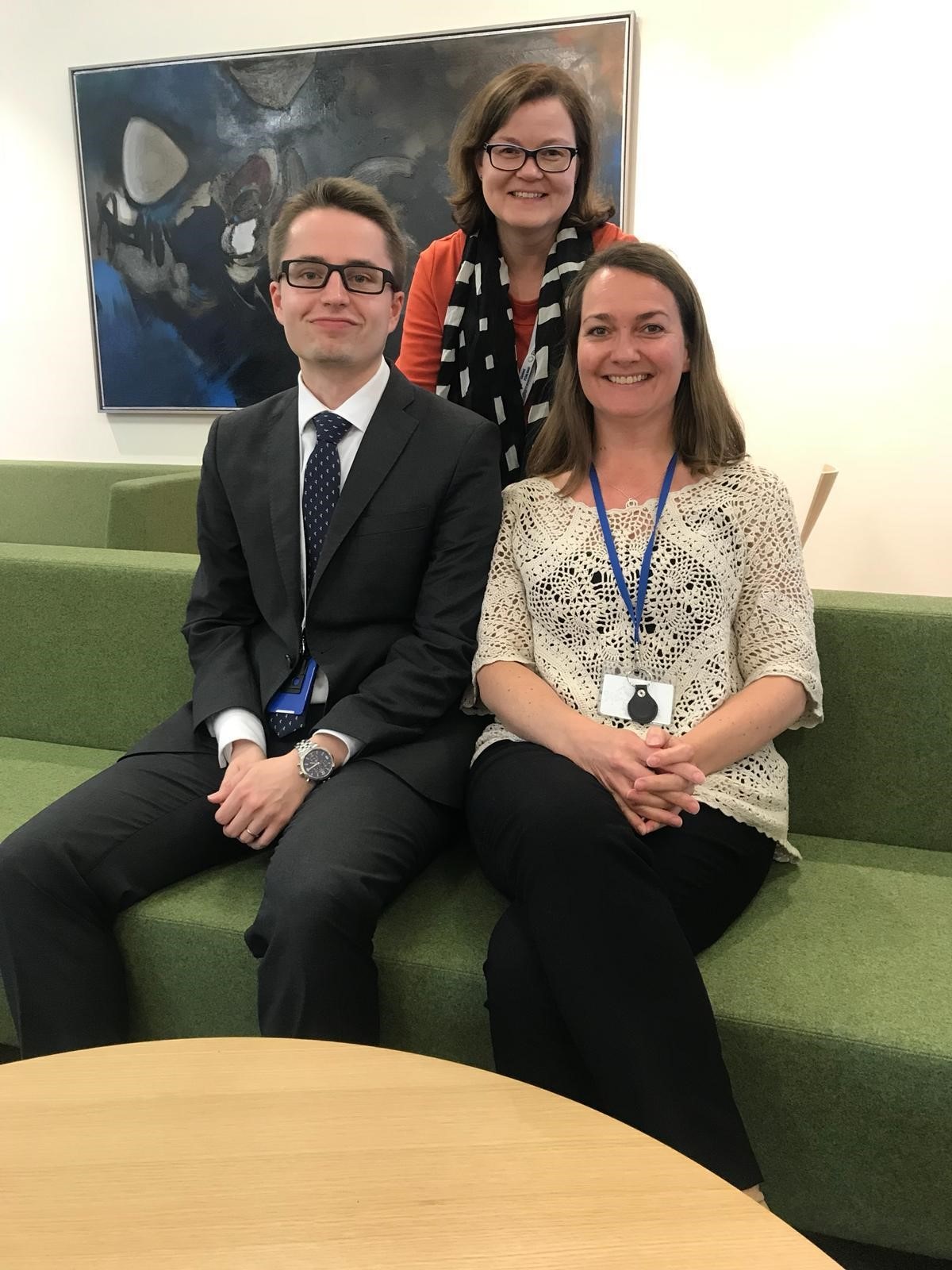 Merja Lahtinen: What did implementation of Finland’s Presidency mean from your viewpoint?

“The planning for Finland’s Presidency of the Council of Europe started more than two years ago, when we invited experts from different ministries to form a Presidency group. The group discussed the issues that Finland should focus on during its term and whether the ministries had the capability to organise meetings and conferences,” Lahtinen says. The help from every expert was very valuable, because in practice Finland had to create the full Presidency from scratch. At that time, the Presidency team at the Foreign Ministry had far fewer members than at the end of the term. “At the start, just three people were responsible for running the show. In particular, it would have been impossible for us to arrange the meeting of Foreign Ministers without additional help,” Lahtinen adds.

During the planning stages, Lahtinen’s team discussed the upcoming Presidency programme and its priorities with Finland’s civil society. “We always hold their views in high regard,” she says.
Even before the start of the Presidency in November last year, the team had to undertake large amounts of research and assessment work in order to resolve the difficult situation in which the Council found itself. The Presidency programme had to be planned well ahead.  “What this meant, above all, was that Finland had to face significant challenges during its Presidency right from the start,” Lahtinen says. The Council’s political, financial and institutional crisis was not the easiest premise for Finland’s Presidency, and according to Lahtinen, the challenging situation largely dictated the use of time and focus of work. “Hundreds of draft speeches, memoranda and reports were written during the Presidency,” Lahtinen describes. “During the busiest times, we would receive several requests for speaking points or background information daily.”
”To sum up, numerous hours of work were required in order to achieve the end result and carry out all the events. The help of all participants with regard to policy content and the practical organisation was invaluable,” Lahtinen states. “At the beginning of the term, the Ministry’s Council of Europe team included three members (a team leader, a senior administrative assistant and an assistant from the Finnish diplomat training course). In addition, we received a lot of support from the assistant in our unit. When the ministerial meeting approached, a civilian serviceman, a project assistant and a university intern joined our team.”

The Committee of Ministers meeting, which was held on 16-17 May, required serious effort from the whole team and the cooperation partners, particularly the police, the staff at the Finlandia Hall and the Kovanen taxi service. “Without help from them, organising the ministerial meeting successfully would not have been possible,” Lahtinen says.

It was not self-evident that the meeting would be successful and result in any decisions or a declaration. How difficult was it to achieve this result?

”The most challenging decision by far was the one on the member States’ rights and obligations, which was adopted at the meeting. The decision stipulates that the Committee of Ministers and the Parliamentary Assembly start to promote processes in order to react in unison to member States that violate the organisation’s rules. This process required a lot of preparatory work during the whole Presidency,” Lahtinen explains. Finland assumed the Presidency at a time when cooperation between the different Council bodies had weakened, and therefore it was necessary to resolve the situation by engaging in a dialogue and building trust. “We did a lot of work before we could bring up the issue on a general level,” she says. All foreign policy leaders and top officials at the Foreign Ministry, the President of the Republic, the Minister for Foreign Affairs, the State Secretary and the Political Department played an important role in the process. As result of Finland’s Presidency, trust within the Council is gradually returning and Finland has received a lot of positive feedback on its work.
Creating a more positive atmosphere was key to achieving a solution. “I could not have imagined before the Presidency that atmosphere can mean so much for solving a problem,” Lahtinen says. In the end, international politics is all about human relations and communication. “Finland’s Presidency ended successfully and this end result would have been difficult to foresee,” she adds.

Was there a particularly memorable moment during the Presidency?

“When my work at the Presidency team began, it was just the two of us in the team: Merja and I,” says Eeva Helminen. While the start was quiet, days turned more hectic as Finland’s presidency approached. “What I remember best is the spirit, solidarity and humour within our seven-member team and the hard work we did especially in May to carry out the ministerial meeting. Cooperation with other public authorities and private businesses was also excellent,” Helminen adds. “I’m very proud of my great coworkers and everybody’s contribution.”
The larger events, including the ministerial meeting and the conference on artificial intelligence and human rights, were the most memorable to Lahtinen. “Those events took a lot of effort and detailed preparation. The celebration for the Council’s 70th anniversary, which was held before the ministerial meeting, was also a remarkable experience,” she says. Lahtinen admits feeling moved at the celebration: “Our resources for preparing for the party were small but everything went very smoothly. I was extremely proud of the work our small team did.” The meeting between the Committee of Ministers and the Parliamentary Assembly on improving their mutual communication is not to be forgotten either. “The mood in that meeting was so constructive as to be almost tangible. It felt as if the meeting represented a significant step on the road to a positive solution.”

According to Koivusaari, the speed and the changing tasks during the Presidency were mind-blowing. “At the moment I remember best drinking a soda with the Foreign Minister after the ministerial meeting. There was a feeling of huge relief coming from him as well as our team. We had pulled it off,” he says.
The Presidency was a long and comprehensive process. What did you get out of it?
”It was truly a huge process. I was able to follow closely the work of top international politicians and take part in it myself. I’m very grateful for the experience, which will be of great benefit in future,” Lahtinen says.

”The past six months also developed my personal characteristics, like the ability to withstand pressure, and improved my organisational skills. Even though it is a platitude, I could say I grew as a person and as a public official. A huge thank-you goes to Merja Lahtinen and Director Nina Nordström, who really impressed me with their strong skillset and pleasant attitude,” Koivusaari says.

Helminen says a career at the Foreign Ministry means continuous development and growth. ”I learned a lot during the Presidency and these lessons will benefit me in the future. Above all, I have very warm memories of the cooperation in our team. In addition, I now have an excellent network of people both in the public and private sphere, who I may have an opportunity to work with in future,” Helminen explains.

Finland’s Presidency of the Council of Europe ended on 17 May when more than 30 Foreign Ministers attended a successful meeting of the Committee of Ministers at the Finlandia Hall.