Director and scriptwriter Kirsikka Saari ia a skilled observer of life’s wistful moments.   In Super Comfort fifty-something Taina has pulled out all the stops to welcome her son Eetu and his girlfriend for a weekend visit.  The more she tries to make everything breezy and perfect, the more awkward everyone feels.  Loneliness set in after the visit cut short by her son but she will find a moment a comfort in the end.

Kirsikka Saari has also written the script for Do I Have to Take Care of Everything (Pitääkö mun kaikki hoitaa?), a comedy short directed by Selma Vilhunen that was nominated for an Oscar in 2014– a first for a Finnish film.  They collaborated again in Stupid Young Heart (Hölmö nuori sydän) which won the Crystal Bear in the youth category at the Berlinale in 2019.

Register at the festival web site to receive viewing codes.  Super Comfort is included in program 1 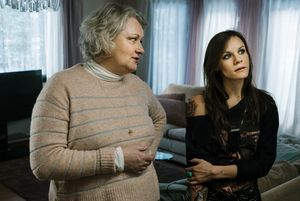