Chef Heikki Nikula from Inari will be at the food film festival Devour! which takes place October 19 - 24 in Wolfsville, Nova Scotia.

Festival that feeds body and soul with an indigenous focus

Devour!(Link to another website.) is already in its 11th year and has an impressive list of visiting culinary personalities.  Over the years food aficionado Phil Rosenthal from Somebody Feed Phil and celebrity chefs Anthony Bourdain, Jacque Pepin, and Dominique Crenn of the two-Michelin-starred Atelier Crenn in San Francisco have been seen at the festival.  The annual celebration transforms Wolfville into a foodie’s paradise, which this year takes place in a hybrid model of online and in-person events.

The theme of this year’s edition is Global Indigenous Cinema and Cuisine and it brings together chefs and their creations from Mexico, Finland, across Canada, and the United States.  We caught up with Finnish Sámi chef Heikki Nikula in Inari, Lapland, as he was getting ready for his trip to Nova Scotia.  He graciously took time to chat with us about his first trip to Canada and shared one his recipes (see below) with us.

Earlier this year he was contacted by the Sámi Parliament(Link to another website.) when Devour! made its inquiries looking for an indigenous chef from Europe.  Nikula’s award-winning restaurant Anaar(Link to another website.) is located only three hundred metres from the Sámi Parliament office, but even with the proximity factor, Nikula mentions that there are only a handful of Sámi chefs in Finland.  The number is higher in Sweden where there is a notable Sámi slow food movement going on and Nikula has worked with them often.

Heikki Nikula is happy to bring his interpretation of Sámi cuisine to the festival.  His menu is not made up of strictly traditional Sámi recipes, but his take on traditional ingredients and elements.  He points out that Sámi culture finds new expression in many art forms, including rap music, heavy metal as part of a living Sámi culture and food is no different.  Surrounding nature and changing seasons provide the inspiration and the menu changes accordingly.  They rely on local ingredients, sometimes foraged by the staff but mostly provided by suppliers.  Nikula notes that there is a boom in foraging and natural ingredients in the Nordic countries and perhaps even globally.

A childhood spent in Inari, often helping with the family business, gave Heikki Nikula an understanding of food service and the restaurant atmosphere.  There was never any pressure to take over and he worked on other projects in Southern Finland before coming back to Inari - home for the past twenty years.  His favourite meals feature local fish whitefish, trout, and grayling, freshly caught from the cold waters of Lapland or reindeer and local game dishes.  It is thanks to his grandfather that he learned to love fish at all.  As a small boy, he would not eat fish at all until his grandfather, who was a commercial fisher, would not take him along on fishing trips unless he also ate what they caught and the joy of fishing won him over.

Nikula’s current go-to ingredients are bison grass (Hierochloë) and garden angelica or wild celery (Angelica archangelica) and they will be part of his demonstration dishes in Wolfsville.  Wild celery is common in Lapland and grows so abundantly that you could almost be mowed like hay. There is no need to ship ingredients from Finland as there are same items or excellent local substitutes readily at hand in Nova Scotia.  We were however able to surprise him with the tidbit that bakeapple(Link to another website.), which is also found in Lapland grows in the boreal forests of Canada including Nova Scotia.  Heikki Nikula is hoping that there will be some time try his luck with salmon fishing during his visit.

Nikula is looking forward to all the events he will be participating in at the festival. His home town of Inari is also a home to Skábmagovat(Link to another website.), the annual Indigenous Peoples’ Film Festival and as a result, he has had the opportunity to meet many indigenous artists from around the world.  According to Nikula, indigenous people from elsewhere share the same relationship with land and nature as the Sámi, as well as many of their lived experiences, so he expects to easily connect with other indigenous chefs at the festival and hopes to do the same with the audiences. 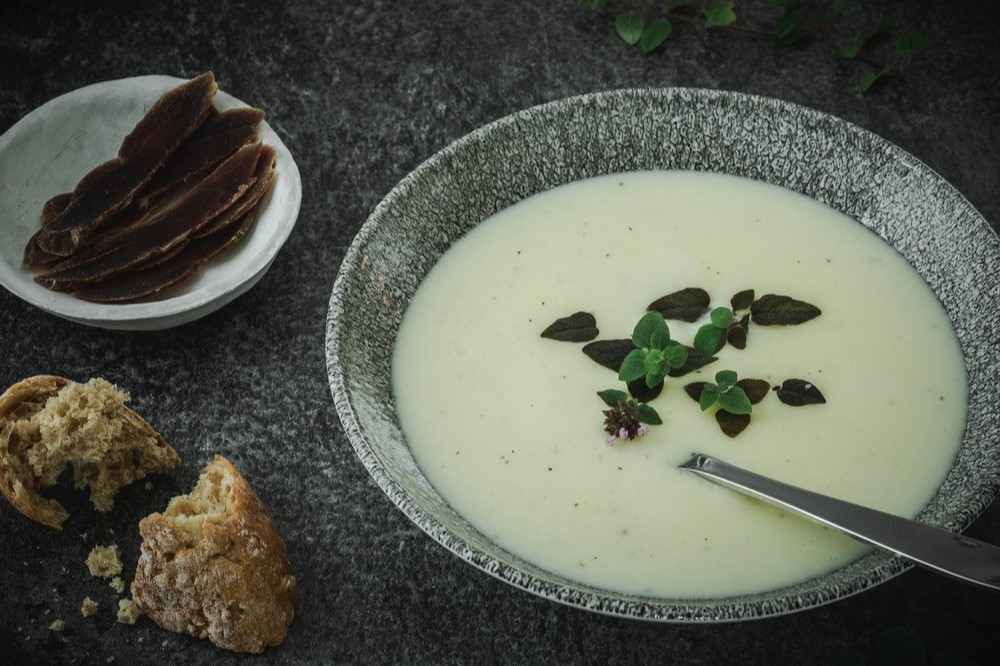 chips of the dry reindeer meat, venison can be used as a substitute

-Peel artichokes straight to the water dish. Add to the a little bit of lemon juice to the water

- Sweat onions in butter, add artichokes and sweat for a moment longer

- Add stock, chopped potatoes and cook carefully about 20 minutes until vegetables are cooked

-Puree soup and flavour it with salt, pepper and nutmeg and taste

-In the end add cream and bring to boil

From Jerusalem artichoke and puikula potato you can have a soup with velvety in texture. On the side of soup goes beautifully thin sliced chips traditional dry meat of reindeer.