Finland Abroad -websites
Who Made You? at the DOXA Documentary Film Festival

Who Made You? at the DOXA Documentary Film Festival

Talented documentary filmmaker Iiris Härmä’s Who Made You? is screening at this year’s online only edition of DOXA Documentary Film Festival of Vancouver, with viewing available anywhere in B.C.

An innate curiosity about people marks Iiris Härmä’s body of work.  Who Made You? (Outouden Laakso) is no exception.  After attending an event focused on the ethics of artificial intelligence she saw an opportunity to capture the moment in time when AI and technology are becoming a part of our lives at an ever-increasing pace. She also wanted to explore the divide between us and the researchers and coders who are shaping our world with their innovations.  As a result, she now has an appreciation on the importance on how personal data is collected and processed and hopes the film is part of the conversation on the way forward on this issue.

The full title of the documentary, Who Made You? Exploring the Uncanny Valley, makes a veiled reference to Silicon Valley.  However, the film takes us from Finland to Spain, Sweden, Greece and Japan in the exploration of our relationship to technology, AI and cyborgs.

Iiris Härmä has a knack of uncovering subjects and topics of interest that might not otherwise get to be in the spotlight.  Her previous feature length documentary Leaving Africa (Hyvästi Afrikka), 2015 was seen at Toronto’s Hot Docs Interanational Documentary Film Festival.  The story of Finnish Riitta, 66 and Ugandan Kata, 63 who ran a sexual health and gender equality education program in Uganda was an international festival hit, with five awards, including the Margaret Meade Filmmaker Award.  It could well be that Iiris Härmä’s degree in ethnography has something to do with her thoughtful choices for topics.

Iiris Härmä’s career in cinema started by working alongside her filmmaker husband Visa Koiso-Kanttila, who encouraged her to take the leap into directing as it was obvious to him she was a natural.  They also own and operate a successful production company, Guerilla Films. 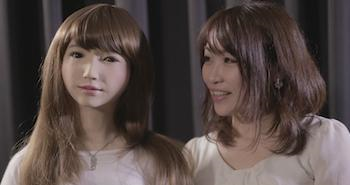